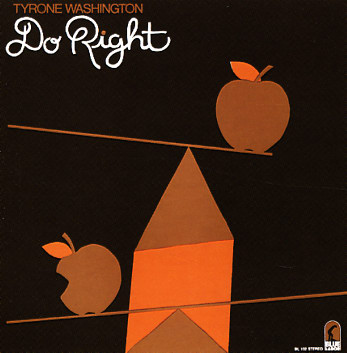 A set of sweet funky jams from saxophonist Tyrone Washington – a player who's probably known best for his late 60s session for Blue Note, but whose heard here in an electrified mode with plenty of choppy rhythms on the bottom – very much in the spirit of some of the best Gary Bartz work from the time! Washington is joined by keyboarist Hubert Eaves for the record – and Eaves weaves (can we say that?) lots of snakey electric piano lines underneath Tyrone's soulful work on tenor, alto, and flute – making for a Bartz-ish mix that's totally great, and sometimes augmented by vocals. Other players include Idris Muhammad on drums, Billy Nichols on guitar, and Rene McLean on alto sax – and the whole thing's great – a wonderful mix of soul and spiritual modes from the time! Titles include "Land Of Eternity", "Paradise", "Brother Man", and "Universal Spiritual Revolt", which is a bit "out" there.  © 1996-2021, Dusty Groove, Inc.