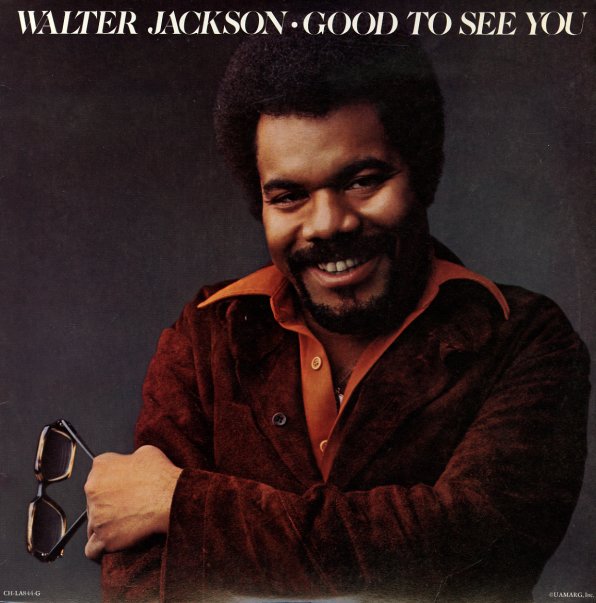 Good To See You

Sophisticated soul from the great Walter Jackson – one of the best voices ever to come out of the Chicago soul scene, and a wonderful interpreter of just about any material! The record's got some wonderful arrangements by Riley Hampton – who worked with Jackson on his earlier sessions for Okeh – and the record recasts Walter as a smooth modern singer with an adult approach, kind of in the same style as Teddy Pendergrass in the late 70s. Includes "Good To See You", "We Could Fly", "Open Up Your Heart", "If I Had My Way", "I Won't Ever Remember Losing You", and "Time". Not nearly as sublime as his work for Okeh, but still not a bad batch of tracks!  © 1996-2023, Dusty Groove, Inc.
(Still sealed! Cover has a cut corner. Shrink has a small open spot on the opening.)

Send In The Clowns
Chi Sound, 1979. Very Good+
LP...$2.99
Forget the million times you've heard the schmaltzy title tune of this one – and check out Walter's version! Like most of his work from the time, the album's an incredibly mature batch of soul tracks – recorded in a very adult style that was similar to Teddy Pendergrass' work from the ... LP, Vinyl record album

Feeling Good
Chi Sound, 1976. Very Good+
LP...$0.99 1.99
The first of six "comeback" albums that this great Chicago soul singer cut during his second wave of recording during the late 70s! Walter had originally done some amazing work with the great Carl Davis at the Okeh label during the mid 60s – and this album marks a return to their ... LP, Vinyl record album

All Day Music
United Artists, 1971. Very Good
LP...$7.99 (CD...$14.99)
A sweet sweet set from the mighty War – and maybe the record that really has the group coming into their own! The record's got a stronger vocal presence than earlier War efforts, which is a really great thing – kind of a blend of sweet soul, heavy funk, and Chicano modes – all ... LP, Vinyl record album