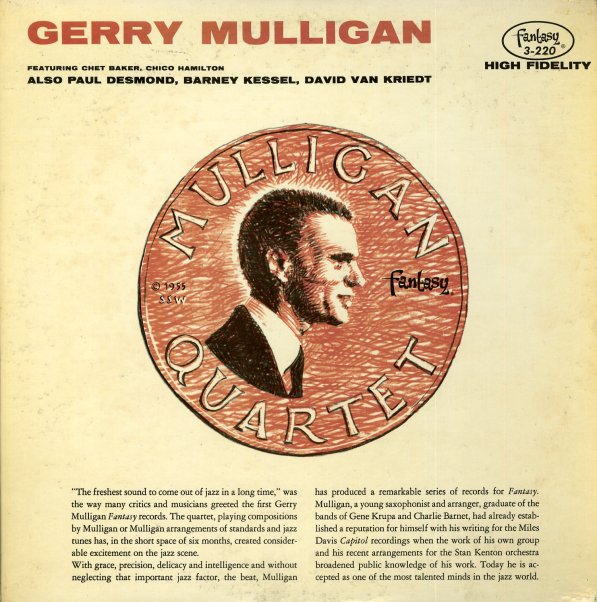 A 50s Fantasy album that brings together 2 earlier 10" jazz sessions – one by Mulligan and one by Desmond, both unusual outings for the players. Side one features Gerry Mulligan working with a strong early group – Chet Baker on trumpet, Chico Hamilton on drums, and Carson Smith on bass – on 4 tracks recorded in San Francisco, and 4 others recorded slightly later in LA. The tunes are short, piano-less, and have that fluid 50s Mulligan groove – and titles include "Turnstile", "Limelight", "Carioca", "Bark For Barksdale", and "Line For Lyons". Side two is a session that features 4 tracks with Paul in a quintet with Dick Collins on trumpet and Dave Van Kriedt on tenor sax – working without a piano, and in a fluid-grooving style that recalls a lot of the Gerry Mulligan style of the time. The other 4 tracks from the set are even more unique – and have Desmond blowing dreamily over a "with voices" chorus – done with the Bill Bates singers in a style that's warmer than similar work by Charlie Parker, and which really points the way towards some of the Desmond solo genius of the 60s. Titles include "Jeruvian", "Garden In The Rain", "Misty Window", "Winky", "Soon", and "Will I Know".  © 1996-2021, Dusty Groove, Inc.
(Red vinyl pressing with deep groove on Side B. Cover has some wear and aging, splitting in the bottom seam with yellowed tape remnants, a bit of pen on front and notes on back, minor stains, and some glooss peel at the opening.)

Use The Stairs
Fantasy, 1980. Near Mint-
LP...$6.99
Use The Stairs is a near-forgotten date from 1980 – recorded at a time when Stanley Turrentine was still steeped in the fuller arrangements picked up during his CTI years – blowing beautifully as a soloist in the larger setting! The sound here is plenty darn hip – thanks to ... LP, Vinyl record album