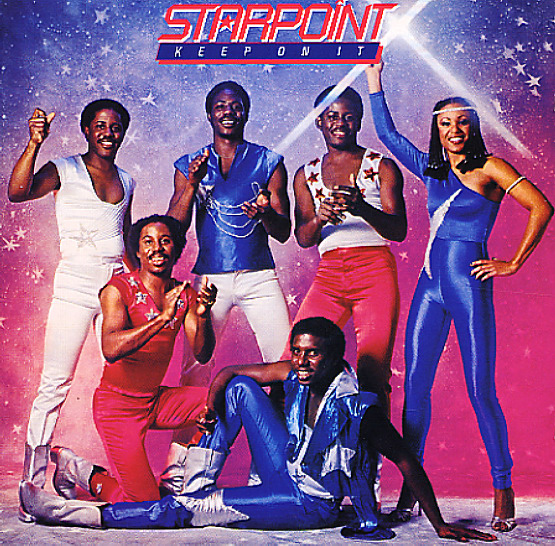 Excellent work from Starpoint – the kind of all-solid album that easily marks them as one of the most soulful groups of the boogie generation! There's a depth here that goes way beyond simple bass-heavy grooves for the dancefloor – a sound that picks a fair bit up from the Earth Wind & Fire groove of the early 70s, and manages to keep some jazzy touches and righteous undercurrents going on – even when the tunes themselves have simpler themes overall. Renee Diggs' lead vocals are especially wonderful – crackling with a warmth that's a nice change from the usual belting club diva mode of the period, and which ties together the rest of the group through the strength of her presence. Rhythms are nicely varied too – with some key ballads sitting nicely next to more uptempo numbers – making for a well-rounded album that's extremely well put together! Titles include "I Just Want To Be Your Lover", "For You", "Keep On It", "We're Into Love", "Starpoint's Here Tonight", and the excellent but too short "Interlude".  © 1996-2020, Dusty Groove, Inc.

Starpoint
Casablanca/PTG (Netherlands), 1980. New Copy
CD...$10.99 (CD...$9.99)
Lean and grooving funk steeped soul from Starpoint – with more of a lively, Earth-based instrumental groove than some of the more drum machine and synth soaked albums that beamed out of the Starpoint spaceship later on in the 80s! This is their first album on Casablanca – a funky bit ... CD

Portrait (with bonus tracks)
Island/PTG (Netherlands), 1983. New Copy
CD...$10.99
Early work from Gwen Guthrie – produced by Sly & Robbie, but with a sweet modern soul sound that's got a lot less of their influence than you'd guess! The sound is much more New York than Jamaica – and that's probably due to some great instrumental backing on keyboards by the likes ... CD