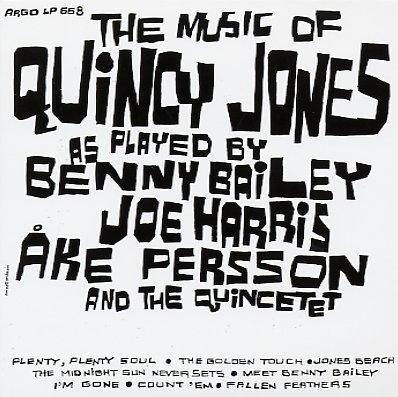 An excellent album that's a perfect document of the strong impact that Quincy Jones had in the transatlantic jazz scene of the late 50s and early 60s. The set was recorded in 1960, and features two players that Quincy would leave behind in Europe to have a huge influence on the scene. Trumpeter Benny Bailey is the greatest of these – and his impact on jazz in Germany and Sweden during the 60s and 70s cannot be discounted. The other is drummer Joe Harris, who does excellent work here in a group that includes Arne Domnerus on sax, Ake Persson on trombone, and Gunnar Svensson on piano – all Swedes that Quincy picked up after touring the country heavily during the late 50s. The set grooves with the best of Jones' work on Mercury from the time – and although Quincy's not listed in the credits, it's probably only because of contractual reasons. Titles are all Jones originals – including "Meet Benny Bailey", "Plenty, Plenty Soul", "Fallen Feathers", and "The Midnight Sun Never Sets".  © 1996-2021, Dusty Groove, Inc.
(Mono white label Review Copy pressing with deep groove. Cover has a cutout hole.)