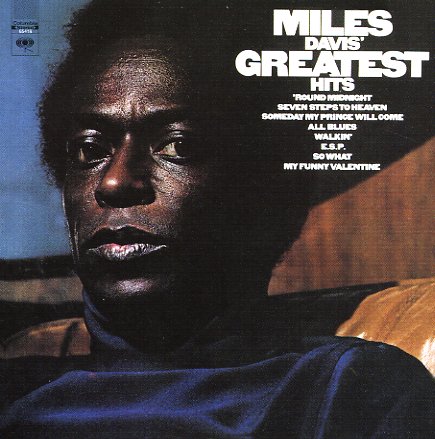 A good collection of work from Miles' early days at Columbia working with Coltrane, up through the pre-Bitches Brew years with the classic Herbie Hancock, Wayne Shorter, Ron Carter, and Tony Williams lineup. Titles include "Walkin (live)", "All Blues (live)", "Someday My Prince Will Come", "So What (live)", "ESP", "Round Midnight", and "Seven Steps To Heaven".  © 1996-2020, Dusty Groove, Inc.
(70s pressing. Cover has some edge wear.)

Miles Davis At Fillmore
Columbia, 1970. Very Good+ 2LP Gatefold
LP...$11.99
Four sides of long improvised grooves from Miles Davis – a set that's quite similar to the classic studio album Bitches Brew, but which captures the sound in more open live setting! Each track on each side is named "Wednesday Miles", "Thursday Miles", and so on – ... LP, Vinyl record album

Sketches Of Spain
Columbia, 1960. Near Mint-
LP...$16.99 (CD...$1.99)
A beautiful collaboration between Miles Davis and the great Gil Evans – and perhaps the most perfectly realized of all their projects! The album's got a wonderfully unified feel – as it begins with long compositions that have a distinct Spanish-tinge (and not a Latin-tinge, which is an ... LP, Vinyl record album