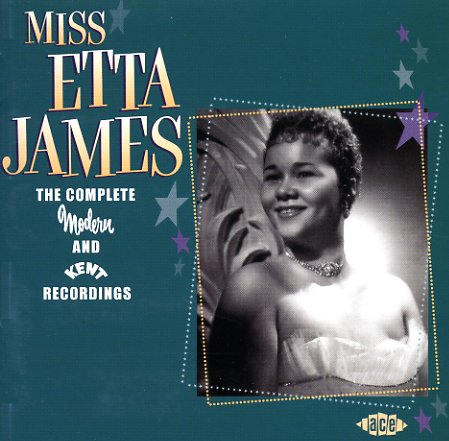 The most complete collection of pre-Chess work by Etta James ever offered – a huge 2CD package that's filled with rare album tracks, key singles, and even some previously unissued material! Etta's fame at Chess in the 60s is a well-known fact of classic soul music – but in the years before hooking up with that label, she recorded some smoking R&B work for the Kent and Modern labels – really hard-hitting stuff that often had a rawer, earthier quality than any of her later recordings. Even at this early date in Etta's career, she had a voice that wouldn't quit – easily blowing away more established R&B singers like Laverne Baker or Ruth Brown – and tearing it up with some great small combo backings and a production style that really let her do her thing. Collection features 42 tracks in all – with tracks that include "The Wallflower", "Fools We Mortals Be", "Baby Baby Every Night", "Sunshine Of Love", "How Big A Fool", "Dance With Me Henry", "Nobody Loves You Like Me", "Don't You Remember", "We're In Love", "I Hope You're Satisfied", "Come What May", "Market Place", "Shortnin Bread Rock", "My One & Only", "I'm A Fool", "Hey Henry", and "That's All".  © 1996-2022, Dusty Groove, Inc.

Just A Little Misunderstanding – Rare & Unissued Motown 1965 to 1968
Motown/Kent (UK), Mid 60s. New Copy
CD...$13.99 19.99
Just when you think you know everything there is to know about Motown, here comes a set to open your ears and blow your mind all over again! The set unearths a huge amount of rare work by The Contours – the rollicking group who gave Motown a sweet album and handful of singles in the 60s, but ... CD