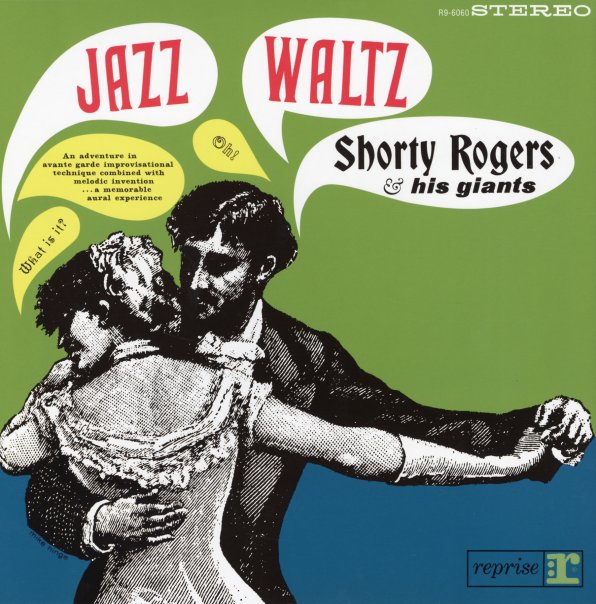 Don't think "waltz music", think "modal jazz" – because the version of jazz waltz that Shorty Rogers serves up here is a great precursor to the great grooves to come on the European scene – especially the work from the artists at MPS Records! Tunes all have this great rhythmic pulse – a way of leaping into a groove that has the piano and bass dancing together wonderfully – often with some cool vibes from Emil Richards, and loads of great reed lines from Bud Shank and Paul Horn! Some tracks feature a small combo, some feature a larger group – and the whole thing is wonderful – with energy that almost rivals the Clarke Boland Big Band with Gigi Campi. Titles include "Be As Children", "Walk On The Wild Side", "Jazz Waltz", "Terrence's Farewell", and "A Taste Of Honey".  © 1996-2021, Dusty Groove, Inc.
(Tri-color stereo pressing with deep groove. Includes the Reprise inner sleeve. Cover has light wear and aging.)

Concert In The Virgin Islands
Reprise, 1965. Very Good+
LP...$9.99
One of the great entries in Duke Ellington's "exotic" albums of the 60s – records that aren't exactly exotica by any stretch of the imagination, but which have musical themes that were inspired by the international travels of the Ellington band at the time! In this case, the locale ... LP, Vinyl record album

Warm Moods
Reprise, 1960. Very Good
LP...$29.99
One of the all-time great ones by Ben Webster! The album was recorded near the end of Webster's all-too-short time on this planet – at a point when he had really perfected a sorrowful tone on tenor, and a strangely sinister approach to ballads – one that gave even familiar tunes an ... LP, Vinyl record album

Kessel/Jazz – Contemporary Latin Rhythms
Reprise, 1961. Very Good-
LP...$11.99
A wonderful wonderful set from Barney Kessel – bossa-inflected jazz, and a wonderful setting for Barney to hit some very groovy lines on electric guitar! The group on the date is part of the strength of the record – with Conte Candoli on trumpet, Emil Richards on vibes, Paul Horn on ... LP, Vinyl record album

This Time By Basie! (alternate cover)
Reprise, 1963. Near Mint-
LP...$19.99
We totally dig Basie's work from the mid 60s! He was working with Quincy Jones at the time – and Quince laid down some very soulful arrangements that used the best jazz elements of the Basie group to turn out some great pop instrumental tracks with a very groovy sound. This album's a ... LP, Vinyl record album

Jazz Variations On Movie Themes
Reprise, Early 60s. Very Good
LP...$11.99
The title tells the whole tale of the album – as pianist Jackson plays jazzy versions of themes from films that include "Never On A Sunday", "A Summer Place", "From Here To Eternity", "The High & The Mighty", "Exodus", "Return To ... LP, Vinyl record album

Shadow Do
Prestige, 1975. Very Good+
LP...$99.99
A key early pairing of saxophonist Gary Bartz and producer Larry Mizell – working here together before their more famous collaboration on Capitol Records, in a sound that's even more freewheeling and open-ended! Bartz still has a bit of an edge in his horn here – the style laid down ... LP, Vinyl record album