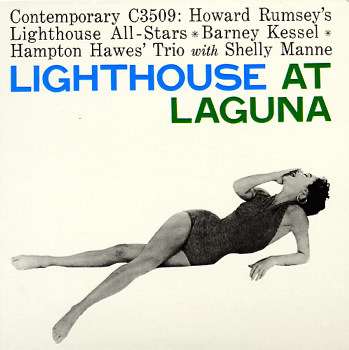 An unusual Lighthouse All Stars album – in that it features 3 different sets of artists in the spotlight – but a unified record nonetheless, as all the work was recorded on the same evening! The core Lighthouse group dominates on most numbers – and features bassist Howard Rumsey at the lead, plus Bud Shank on alto and flute, Bob Cooper on tenor sax, Frank Rosolino on trombone, and Claude Williamson on piano. But on one track, the group's augmented by Barney Kessel – who handles the lead solo on "Round Midnight" – and on others, they step aside and let the Hampton Hawes trio come in and perform versions of "Walkin" and "The Champ". But given the presence of Cooper and Shank on horns, we're most partial to the All Stars tunes – and really dig their originals "Mood For Lighthouse", "Witch Doctor", "Blind Man's Bluff", and "Lady Jean".  © 1996-2020, Dusty Groove, Inc.
(Original Lighthouse/Contemporary pressing with deep groove. Cover has light wear and aging, with a small piece of stuck-on paper at the spine.)