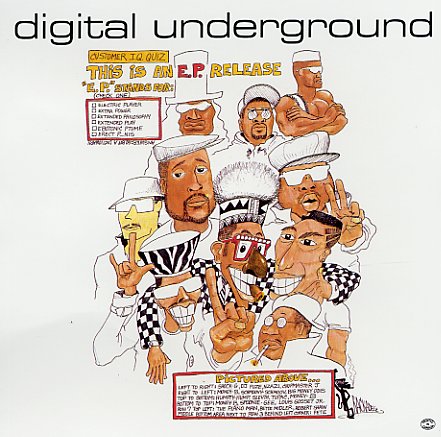 Also available
Digital Underground — This Is An EP Release ... LP 15.99

Maybe just an EP, but a short set that's every bit as important to the Digital Underground catalog as their full length albums – as the whole thing is overflowing with the kind of funky tracks that made these guys a standout right from the start! The set's only got six tracks, but that maybe makes it even tighter and more unified than you might expect – as the whole thing's got that classic bass-heavy funk approach that made Digital Underground such a key link between hip hop and soul, in both their 90s present and the past. Tracks include "Same Song", "Tie The Knot", "The Way We Swing (remix)", "Nuttin Nis Funky", "Packet Man (Worth A Packet remix)", and "Arguin On The Funk".  © 1996-2021, Dusty Groove, Inc.