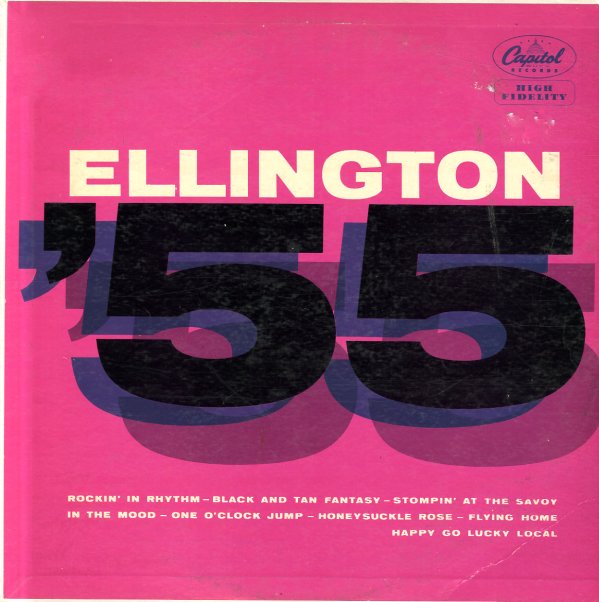 One of Duke's most popular albums of the 50s – but we won't hold that against him! The session's one of a number of 50s outings that revisit older classics with the new level of quality offered in the studio – and it's got a similar feel to some of Duke's work for Bethlehem around the same time, which was also done by producer Gus Wildi – tight, but never too facile – and a perfect demonstration of the great balance the Ellington orchestra had at the time. The group includes key players Ray Nance, Cat Anderson, Clark Terry, Juan Tizol, Harry Carney, Paul Gonsalves, and Jimmy Hamilton – and titles include "Black & Tan Fantasy", "Rockin In Rhythm", "Flying Home", "Happy Go Lucky Local", and "In The Mood".  © 1996-2022, Dusty Groove, Inc.
(Abridged 70s yellow label pressing.)

Duke Ellington At Fargo 1940 – Vol 2
Jazz Heritage, 1940. Near Mint-
LP...$7.99
A great documentation of this rare live set from 1940 – one of the best slices of Ellington from the time! With Johnny Hodges on alto sax, Duke Ellington on piano, Harry Carney on baritone sax & clarinet, Jimmy Blanton on bass, Otto Hardwick on alto sax & clarinet, Barney Bigard on ... LP, Vinyl record album

Newport 1958
Columbia, 1958. Very Good+
LP...$24.99
Duke Ellington at Newport and in the studio – in a set of tracks recorded both live and away from the concert – but with a really unified feel overall! Duke's group here is in fine fine form – with key late 50s players who include Johnny Hodges on alto, Paul Gonsalves on tenor, ... LP, Vinyl record album

Drum Is A Woman
Columbia, 1956. Very Good+
LP...$14.99
A hokey cover and title, but a hip little record from Duke Ellington – kind of a story of percussion and jazz, all wrapped together with some great vocals and narration! The format is kind of far-reaching, but never too stuffy – and in a way, the album offers a great opportunity to ... LP, Vinyl record album