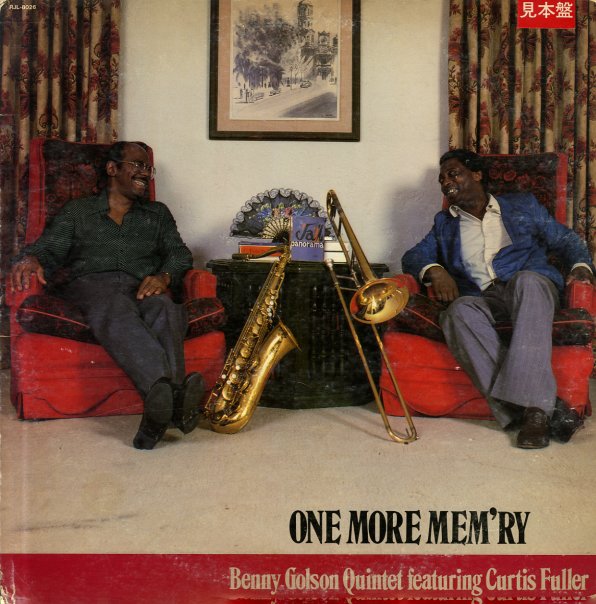 A really beautiful Japanese-only session from Benny Golson – and proof that, throughout the years, Golson could always continue to turn out wonderful material! Benny's working here with old bandmate Curtis Fuller on trombone – and the pair are supported by a trio who include Bill Mays on piano, Bob Magnusson on bass, and Roy McCurdy on drums – all held wonderfully in command by Golson, who's working here with a tightness that recalls Jazztet years, yet which also has him and Fuller opening up in nice long solos. There's a sense of warmth here that crackles wonderfully – that raspy Golson tone that we first grew to love in the late 50s, and which has only deepened with age by this point. The set includes the wonderful original tune "One More Mem'ry", plus great versions of Golson's "Sad To Say", "Touch Me Lightly", "Five Spot After Dark", "Once Again", and "Out Of The Past".  © 1996-2022, Dusty Groove, Inc.
(Japanese pressing.)

Benny Golson & The Philadelphians (horse cover)
United Artists, 1958. Very Good
LP...$38.99
A killer set of hardbop tracks that shows what a great tenorist Benny Golson was during the late 50s! The session features Benny on tenor with other Philly-mates, like Lee Morgan, Ray Bryant, Percy Heath, and Philly Joe Jones – and the set's got all the tightness of a late 50's Jazz ... LP, Vinyl record album

Bossa Antigua
RCA, 1965. Very Good+
LP...$49.99
The team of Paul Desmond and Jim Hall was one of the best ideas ever forged in American jazz of the 60s – and the icy pair are perfect company together on this album of bossa-inflected tracks with a very cool edge! The album allows Desmond's alto to take on a warmth and flowing quality it ... LP, Vinyl record album

Last Train From Overbrook
Argo, 1958. Very Good+
LP...$9.99
A wonderful album from Moody – one of his "comeback" albums for Chess/Argo, recorded after his release from the Overbrook institution, hence the title. By this point, Moody was writing and playing with much more of an edge than during his bebop days – and the record certainly ... LP, Vinyl record album