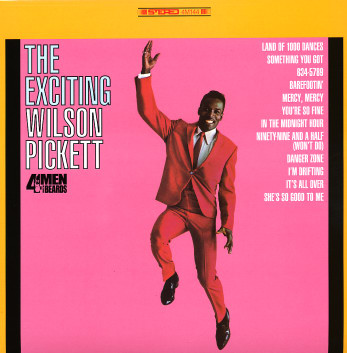 Always exciting work from the Wicked Pickett – a set that's filled with sharp-edged soul tracks throughout – and which perfectly shows why Wilson was a key link between funk and soul back in the 60s! The album was recorded at the two great hubs of southern soul production in the 60s – Memphis and Muscle Shoals – and the tracks includes some key Pickett reworkings of other hits into his own classics, plus a few more penned for the album that are equally as great! Titles include "In The Midnight Hour", "Land Of 1000 Dances", "Something You Got", "Mercy Mercy", "Danger Zone", "It's All Over", "99 & 1/2 Won't Do", and "634-5789".  © 1996-2022, Dusty Groove, Inc.
(Mono red and purple label pressing. Cover has some wear and aging, small sticker spot, a name in pen on both sides, and notes in back. Labels have some pen.)