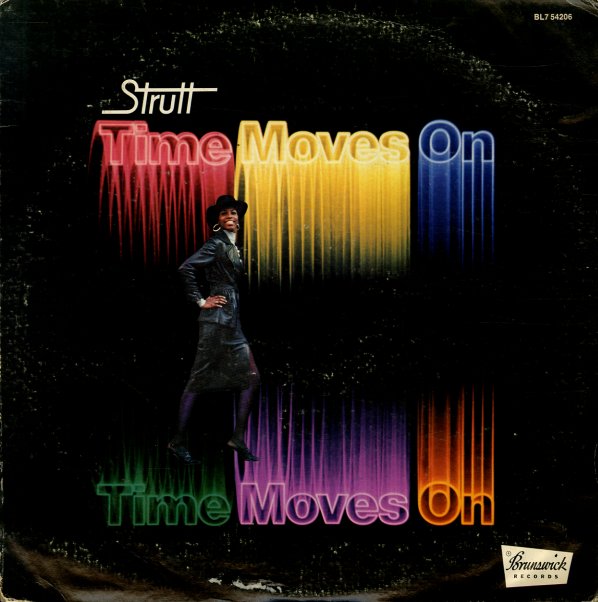 Part funk, part disco, and all the way soul – served up in this one and only album from Strutt! The group were an obscure New Jersey combo from the 70s, but they step out beautifully on this rare Brunswick album – which has the same sort of funk club groove you'd find on a few of the label's other gems from this late period – like work by Tony Valor or Marilyn Farra & Satin Soul! All cuts have vocals, but the real strength of the group lies in their funky combo backings – an approach that's really honed to a "t" here, in a style that shows that the best early club music always had plenty of live, spontaneous instrumentation in the mix! Willie Bridges turns in a few great sax solos on the set – and titles include "Funky Sign", "Funky Baby Feet", "We've Come A Long Way Baby", "Said You Didn't Love Him", "If Wishing Made It So", "Time Moves On", and "Front Row Romeo" – in both vocal and instrumental versions.  © 1996-2022, Dusty Groove, Inc.

Manufacturers Of Soul
Brunswick, 1968. Sealed
LP...$19.99
A really wonderful collaboration between two very unlikely partners – and a great album that really stands out as some of the best work from both artists in the 60s! Count Basie's group gets hard and soulful on the record – and even a little funky on the best cuts – and Jackie ... LP, Vinyl record album

Nobody But You
Brunswick, 1976. Near Mint-
LP...$24.99
One of the last great albums that Jackie Wilson ever recorded – a sublime set of 70s soul that has some very different backings than before, all a perfect fit for those amazing Wilson vocals! David Van DePitte handled the arrangements – and wonderfully blends together strings and soul ... LP, Vinyl record album

Anthology – Looking Back
Motown, Late 60s/Mid 70s. Very Good- 3LP Gatefold
LP...$6.99
A great set of Stevie's best tracks for Motown! 3 LPs deep, with 40 tracks in all, mostly from the late 60s, with a handful of numbers from the early 70s, including a few goodies that are getting tougher to find on wax. Includes "Hey Love", "Angie Girl", "Yester-Me, ... LP, Vinyl record album

Imagination
Buddah, 1973. Sealed
LP...$14.99
A pivotal album for Gladys Knight and group – as the record features their super-huge hit "The Midnight Train To Georgia", a landmark track that not only had a catchy pop hook, but which spoke volumes about African-American migration in the postwar years. The track's one of those ... LP, Vinyl record album

Victory
Epic, 1984. Near Mint- Gatefold
LP...$11.99
Michael Jackson's last album with his famous family – a set of electric 80s soul that's a bit different than Jackson's well-known solo work! In a way, the later Jacksons albums almost feel like a place where Michael can try out some ideas that don't fit as tightly into the overall sound of ... LP, Vinyl record album