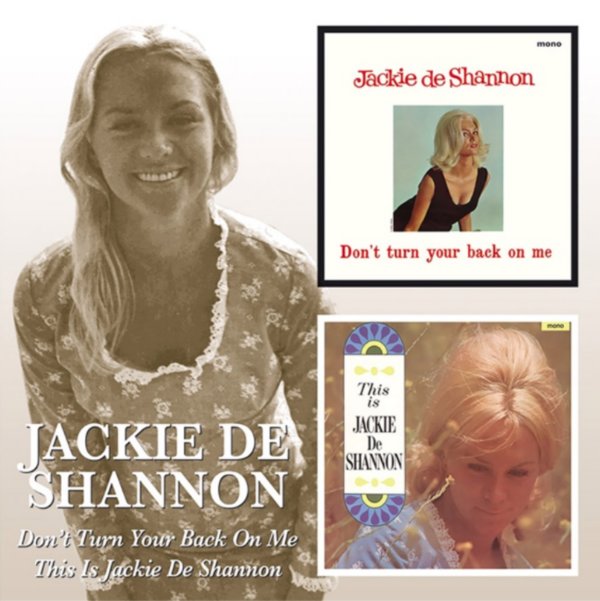 Don't Turn Your Back On Me/This Is Jackie De Shannon

A pair of albums from the great Jackie DeShannon – back to back on a single CD! First up is the UK-only release Don't Turn Your Back On Me – a great batch of material with a sweet west coast pop groove – and one that includes a fair number of original tunes written by Jackie herself! Jackie's ability to write her own material really made her stand out amongst sweeter female 60s singers – and it ensured that on an album like this, she'd be working with a depth that went beyond simple pop, and which avoided the over-trodden filler that clogged up too many other albums of the genre. Titles include "Needles & Pins", "Don't Turn Your Back On Me", "She Don't Understand Him Like I Do", "When You Walk In The Room", "Oh Boy", "Hold Your Head High", "It's Love Baby", "The Prince", and "You Won't Forget Me". This Is features the young Jackie DeShannon in a really wonderful setting – partly in the mode of her earlier singles for Imperial Records, partly hitting some hipper, more adult modes – thanks in part to production help from Burt Bacharach! Burt gives Jackie a great early hit with a classic reading of "What The World Needs Now" – and in the spirit of including that tune, the record opens up a bit more to other songwriters than some of DeShannon's other albums – as Jackie's wonderful vocals really do a great job with a nice variety of work, alongside a few of her own tunes too. Titles include "What The World Needs Now", "Don't Let The Sun Catch You Crying", "Take Me Tonight", "Summertime", "Go On Your Way", "After Last Night", "Am I Making It Hard On You", "Hellos & Goodbyes", and "I'm Gonna Be Strong".  © 1996-2020, Dusty Groove, Inc.