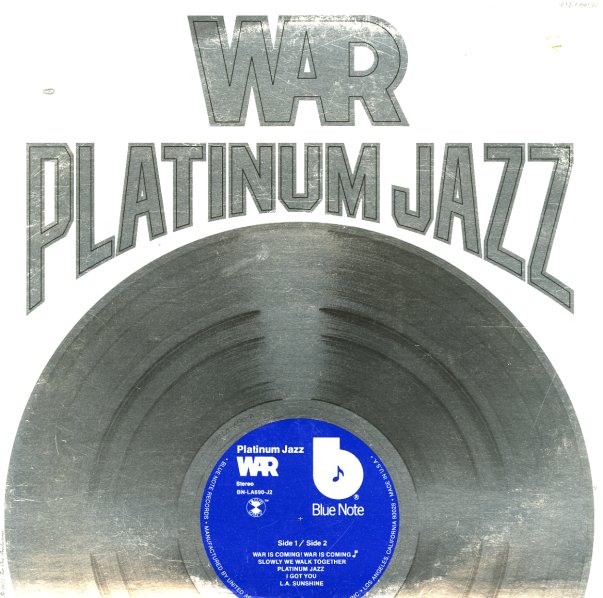 Sweet jazzy work from War – a record that has them stretching things out a bit from before, and finding new ways to groove for the second half of the 70s! All the core elements are still firmly in place – that sublime blend of jazz, soul, funk, and Latin elements – but there's a slight shift in the presentation, with maybe just a touch more of the jazz promised in the title – which might have to do with the album's initial placement as a Blue Note Records title! The first half of the record features all new material, showcasing this slight shift in the group's sound – and a mode that's nicely free of any hits – and the second half of the set brings back some key jazzy tracks from earlier records, which fit perfectly into place. Titles include "War Is Coming", "I Got You", "LA Sunshine", "Platinum Jazz", "Slowly We Walk Together", "River Niger", "H2Overture", "City Country City", "Four Cornered Room", and "Deliver The Word".  © 1996-2022, Dusty Groove, Inc.
(Cover has a cut corner, a name in pen, and surface wear. Labels have a name in pen.)

All Day Music
United Artists, 1971. Very Good+
LP...$18.99
A sweet sweet set from the mighty War – and maybe the record that really has the group coming into their own! The record's got a stronger vocal presence than earlier War efforts, which is a really great thing – kind of a blend of sweet soul, heavy funk, and Chicano modes – all ... LP, Vinyl record album

World Is A Ghetto
United Artists, 1972. Very Good
LP...$24.99 (LP...$25.99, CD...$5.99)
A monster from start to finish – not only the greatest album from War, but maybe one of the greatest mainstream funk albums of all time! The set's got a really unique groove – one that so many others tried to copy, but which was forged here first – in a wicked LA blend of Chicano ... LP, Vinyl record album

When Love Is New
Philadelphia International, 1975. Very Good+
LP...$7.99
Great stuff from Billy – not his most famous album, but filled with some obscure treasures that really stand out in his work – and the stellar Philadelphia International label! The record's got a tight Gamble/Huff sound – moving very much into the Philly modern style that would ... LP, Vinyl record album