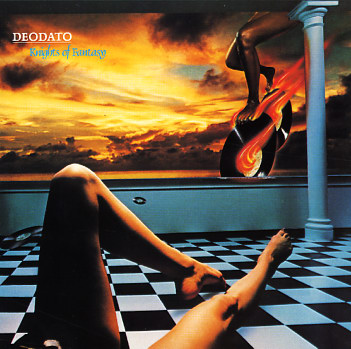 Smooth jazzy work from Deodato – a record that takes off from his electric keyboard work of the early 70s, and shows his growing interest in modern soul and R&B a the time! Deodato's still a few years way from some of his famous soul production work, but he's already got a great ear for a groove – and works in a style that's tight, but never too slick – the best Joe Sample or Crusaders territory, but even more groove oriented too. You can definitely hear Deodato's growing taste for modern soul here – especially on the seminal club jammer "Whistle Bump", which is a tight keyboard-driven groove, with some sweeping strings underneath wah wah guitar. The cut's the real standout on the album – although there's a few other nice moments, like "Space Dust" and "Lovely Lady", which has a great mellow Bob James-ish sound.  © 1996-2022, Dusty Groove, Inc.
(Cover has a partially unglued bottom seam.)