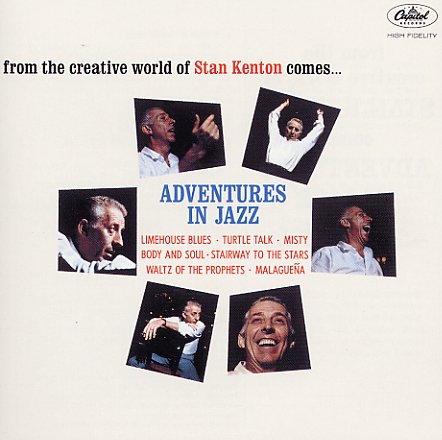 Stan reprises his famous modernist swing in a great little album that's one of his best works from the early 60s. The tracks are longish, with the mixture of dark shading and breakout solos that grace some of his best early work – and although the players in the group aren't the famous west coasters that Stan first brought to fame, they all do a fine job when the solo moment comes. Titles include "Waltz Of The Prophets", "Turtle Talk", "Malaguena", and "Body & Soul".  © 1996-2021, Dusty Groove, Inc.
(Mono rainbow label pressing. Cover has a surface wear, a price sticker remnant, and minor splitting on the top seam.)

Cuban Fire
Capitol, 1956. Very Good+
LP...$11.99 (CD...$5.99)
One of Kenton's greatest records, and the one in which he proves his dedication to Latin styles, by serving up a killer batch of Afro-Cuban tracks with an incredibly authentic feel. The great Johnny Richards handled the arrangements, and the tracks are long and drawn out, with plenty of solo space ... LP, Vinyl record album

Fire, Fury & Fun
Creative World, 1974. Near Mint-
LP...$2.99
A hokey title, but a nice little set – one of Stan's under-rated cookers for his own Creative World label from the 70s! The tracks are all long, fresh, and warmly chromatic – a bit funky at times, and kind of a 70s take on the Kenton style of earlier years – pushing the solos ... LP, Vinyl record album