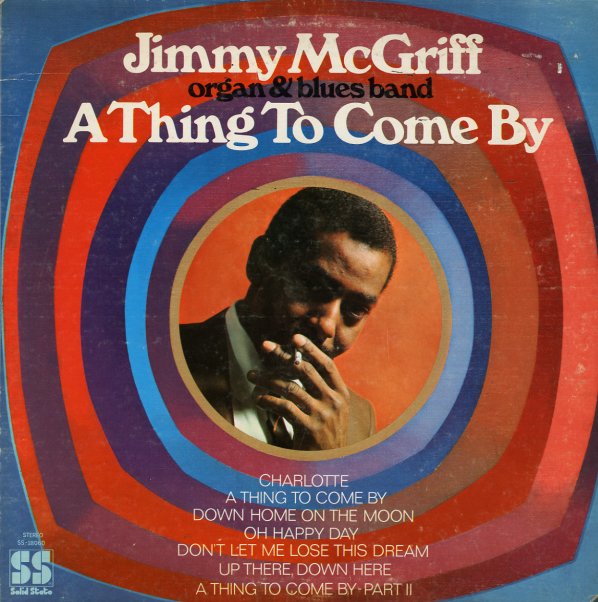 Thing To Come By

A really fantastic record from Hammond hero Jimmy McGriff – and one that has him opening up his groove a fair bit more than on his early Sue Records sides! Jimmy's sense of rhythm and timing here is great – really changing up and keeping things interesting – still with enough of his strong R&B action on the keys of the organ, but in a very different way that makes the whole album a real standout in his catalog – with a sinister bubbling under funky feel that's just great. Includes the monster cut "Charlotte", which has sort of a rolling, bassy intro that would make a great sample – plus the cuts "Up There, Down Here", "Thing To Come By", and "Down Home On The Moon".  © 1996-2022, Dusty Groove, Inc.
(Original pressing. Cover has a cut corner and some wear. Vinyl has a few small marks that click during the first three tracks on side 2.)

Outside Looking In
LC, 1978. Near Mint- Gatefold
LP...$6.99
Jimmy hits a bit of a CTI groove here – working with larger backings from Brad Baker, but still in a style that's got a heck of a lot of soul, despite the smoothness! There's plenty of great space for solo work on the set, and Jimmy Ponder is especially nice in the format – hitting ... LP, Vinyl record album

Insight
Solid State, 1968. Very Good+ Gatefold
LP...$28.99
Sublime vibes from a young Mike Mainieri – still working here mostly in a jazz mode, but also stretching out towards some of his experiments to come in the 70s! There's a dark sort of sound to the record – definitely an echo of the MJQ generation, but taken further too – and ... LP, Vinyl record album

Cobra
Epic, 1979. Near Mint-
LP...$7.99
A great little album of funky fusion tracks – slick, to be sure, but with plenty of choppy bits that keep the funk component nice and strong. The group's led by keyboardist Dale Jacobs, who plays Fender Rhodes, Roland SH-5, and clavinet – and he's got a choppy groove that reminds us of ... LP, Vinyl record album