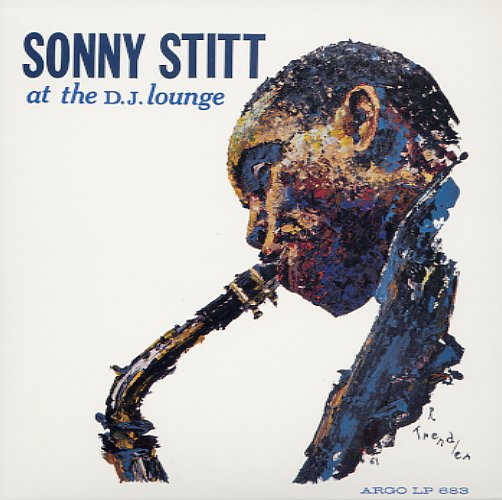 Sonny Stitt At The DJ Lounge

A classic from Stitt – cut during the underground days of the early 60s, when both he and Gene Ammons seemed to be recording for just about every jazz label around, and when they both seemed to be doing an awful lot of work in Chicago. This album was done in a flurry that Jug and Stitt cut for Argo during 1961 – and it's a Stitt-only session, recorded at the super-hip DJ Lounge, owned by Chicago spinner McKie Fitzhugh down at the intersection of 63rd and Cottage Grove. The group's an organ combo, with Eddie Buster on the Hammon, Joe Shelton on drums, and John Board joining in for a bit more tenor. (Interesting to note is the fact that Board made a number of classic soul session appearances later on in the decade – but this is one of his few jazz recordings.) The set's very hard-grooving – with longish tracks that let Stitt and Board go head to head in the same style he was used to with Ammons. Titles include "McKies", "Jay Tee", "Free Chicken", and "Blue Moon".  © 1996-2020, Dusty Groove, Inc.
(70s orange label pressing. Cover has some wear, splitting and masking tape.)

Cole Slaw
Argo, 1964. Very Good
LP...$9.99
Poppa Lou in a straight soul jazz format, recorded in the mid 60's, between his two stints for Blue Note. He's playing here with his solid combo that includes Herman Foster on piano, and they're backed up by Ray Baretto on conga, for a nice rolling groove. Tracks include "Soul Gumbo", ... LP, Vinyl record album

In Crowd
Argo, 1965. Very Good
LP...$2.99
Easily one of the biggest selling jazz albums of the 60s – a crowning achievement for Ramsey Lewis and his popular trio with Eldee Young on bass and Redd Holt on drums! The set was recorded live at the Bohemian Caverns in DC, and the trio are perfect in the setting – going at the ... LP, Vinyl record album

Relaxin With Sandy Mosse
Argo, 1958. Very Good+
LP...$14.99
An obscure side featuring the equally obscure Chicago tenor player Sandy Mosse. Mosse works here in two settings – one side features a quartet with Junior Mance on piano, Bob Cranshaw on bass, and Marty Clausen on drums; the other side features the same quartet, but with Eddie Higgins on ... LP, Vinyl record album

Marian McPartland At The London House
Argo, 1958. Very Good
LP...$6.99
Proof that Marian McPartland actually did something professionally before working for NPR! This obscure session from the 50's is one of her best, and features the lovely pianist cut live before a crowd at The London House in Chicago. Titles include "Easy Blues", "So Many ... LP, Vinyl record album