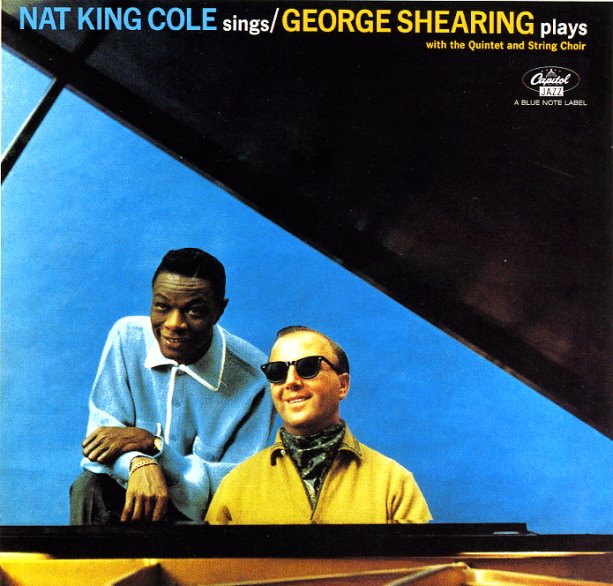 A nice little session that's one of Nat's last great vocal albums – thanks to some solid jazz backing by George Shearing. Shearing's group here is a super-hip west coast Latin one, with Emil Richards on vibes, Al Hendrickson on guitar, Al McKibbon on bass, and Shelly Manne on drums. Most tracks have them augmented by some larger backings by Ralph Carmichael – which creates this dreamy jazzy pillow for Nat to sing over. Cole's voice is still super-sweet and super-sexy, and the record is a good mix of ballads and more jazzy material. Titles include "Lost April", "Azure-Te", "September Song", "Don't Go", "There's A Lull In My Life", and "Serenata".  © 1996-2022, Dusty Groove, Inc.
(70s yellow label pressing.)

Sings For Two In Love
Capitol, Mid 50s. Very Good+
LP...$11.99
Wonderful stuff by Nat – truly one of his greatest Capitol vocal albums, and set to great arrangements by Nelson Riddle, very much in a classic mode. Tracks include heartbreakers like "Dinner For One, James", "There Will Never Be Another You", and "There Goes My ... LP, Vinyl record album