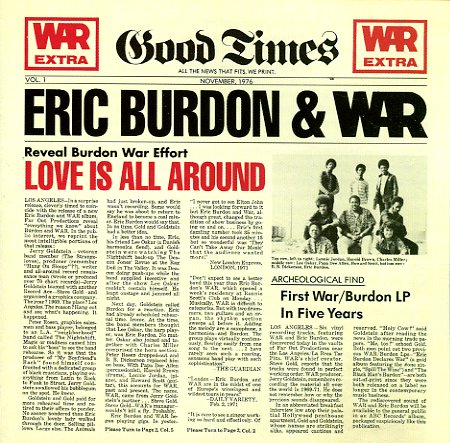 Love Is All Around

A selection of tracks culled from the days when War were working with Eric Burdon – during the years 1969 and 1970, when the ex-Animal tried to show the world that he actually had some real soul cred, and hooked up with this hip funky combo from LA to lay down his groove. The tracks are very much in the vein of Burdon's best early stuff with the group – and the album includes two funky rock workouts, versions of "Paint It Black" and "Day In The Life" that both run for a very long time. Other tracks include "Love Is All Around", "Magic Mountain", and "Home Dream".  © 1996-2022, Dusty Groove, Inc.
(Cover has a cutout notch.)

Platinum Jazz
Blue Note, 1977. Near Mint- 2LP Gatefold
LP...$14.99 (CD...$14.99)
Sweet jazzy work from War – a record that has them stretching things out a bit from before, and finding new ways to groove for the second half of the 70s! All the core elements are still firmly in place – that sublime blend of jazz, soul, funk, and Latin elements – but there's a ... LP, Vinyl record album

Greatest Hits
United Artists, Early 70s. Very Good+
LP...$14.99
A monster set of Chicano funky grooves from LA – most of which forever transformed the sound of funk! The album includes most of the band's best cuts – like "Slippin Into Darkness", "Cisco Kid", "World Is A Ghetto", "All Day Music", "Me & ... LP, Vinyl record album

Deliver The Word
United Artists, 1973. Near Mint-
LP...$11.99 (LP...$24.99)
War delivers the word, and a whole lot more as well – that amazing blend of styles that always made the group way more than just the sum of its parts! The classic groove is very firmly in place here – a great style that mixes jazz funk with a freer jamming style borrowed from Latin ... LP, Vinyl record album

World Is A Ghetto
United Artists, 1972. Very Good
LP...$19.99 24.99 (LP...$25.99)
A monster from start to finish – not only the greatest album from War, but maybe one of the greatest mainstream funk albums of all time! The set's got a really unique groove – one that so many others tried to copy, but which was forged here first – in a wicked LA blend of Chicano ... LP, Vinyl record album