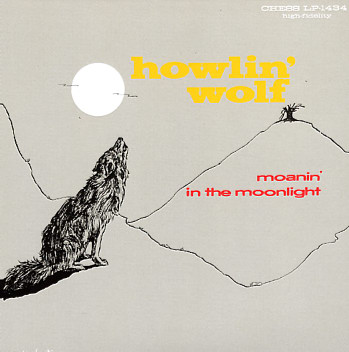 Moanin In The Moonlight

Classic raspy vocals from the legendary Howlin Wolf – singing here in a way that definitely lives up to his nickname! The sound here is spare and stripped down, with very little accompaniment – usually just a bit of guitar, piano, bass, and drums – and sometimes not even all that much! Wolf's vocals are wonderful throughout – archetypal, but not nearly as cliched as some of his contemporaries came to sound – with a timeless feel that really holds up throughout. Titles include "Smokestack Lightnin", "No Place To Go", "All Night Boogie", "Evil", "I Asked For Water", "Forty Four", and "Somebody In My Home".  © 1996-2021, Dusty Groove, Inc.
(80s Original Chess Masters pressing.)