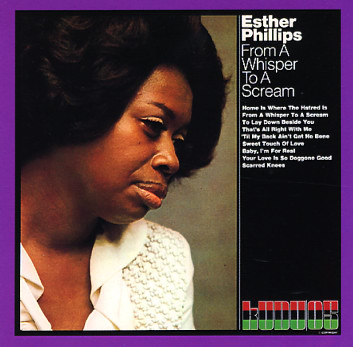 From A Whisper To A Scream

One of our favorite-ever albums from Esther Phillips – an album that really helped her transform her sound for the 70s! The approach here is a lot more jazzy than before – served up with a good dose of funk, thanks to arrangements from Pee Wee Ellis – fresh from his work with James Brown, but even more electrically-oriented here! The groove is great – and the album's one of the best Kudu sides from the early 70s – a perfect blend of soul, jazz, and funk – all wrapped up with a new level of sophistication that benefits all parties involved. Other players include Richard Tee on keyboards, Eric Gale on guitar, Bernard Purdie on drums, Airto on percussion, and Hank Crawford on alto sax. Titles include an incredible cover of Gil Scott Heron's "Home Is Where The Hatred Is", plus "From A Whisper To A Scream", "Till My Back Ain't Got No Bone", "Your Love Is So Doggone Good", Scarred Knees", and "Baby, I'm For Real".  © 1996-2021, Dusty Groove, Inc.
(Cover has light wear and a name in pen.)

Capricorn Princess
Kudu, 1976. Near Mint-
LP...$14.99
A pretty amazing set from Esther Phillips – her final album for Kudu – and a beautiful mix of soaring soul sounds from one the most unique, emotionally-inflected soul vocalists of her era! Esther's in prime Kudu mode here – working with jazzy arrangements by David Matthews and ... LP, Vinyl record album

Jass-Ay-Lay-Dee
Mercury, 1978. Very Good Gatefold
LP...$9.99
While there was no naked bald lady on the cover of Jass-Ay-Lay-Dee, it is actually a move back towards the sweatier funk sounds of their more classic LPs. There's some tight playing and solid songwriting going on here, too, with a bit less of the smooth, sultry grooves with funky touches that ... LP, Vinyl record album