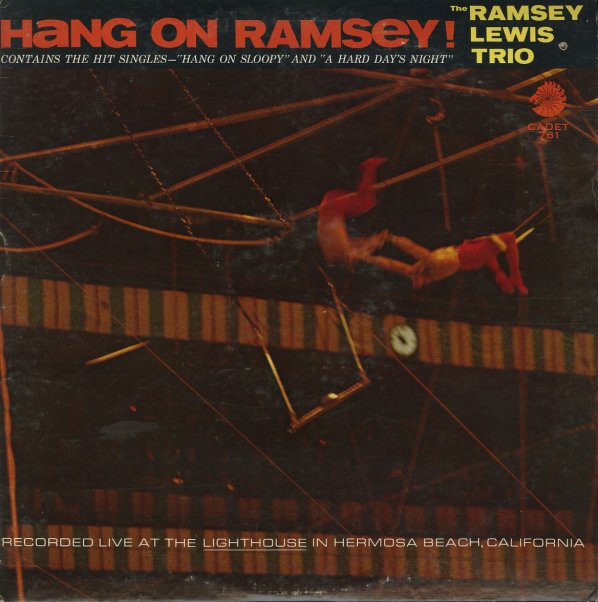 Easily one of Ramsey Lewis' most successful records – featuring the hit soul jazz style that he forged with the Young/Holt rhythm combo, honed to perfection before a live crowd at The Lighthouse in Hermosa Beach. The record's a key part of Ramsey's live recorded output – showing the trio in pyrotechnic form before the kind of packed-house audiences they were playing to nightly at the time. Includes swinging versions of "Hard Day's Night", "High Heel Sneakers", and "Hang On Sloopy" – plus the original cut "Movin Easy".  © 1996-2022, Dusty Groove, Inc.
(Blue fade label stereo pressing.)

Up Pops Ramsey Lewis
Cadet, 1967. Very Good
LP...$4.99
Although Ramsey first scored big with his spare trio recordings during the late 50s, by this point in his career, Cadet were wisely playing with his sound a lot, adding in new elements to keep things fresh and soulful. Such is the case with this album, which has Ramsey's second trio (with ... LP, Vinyl record album

Double Exposure
Chess/Cadet, Late 60s. Near Mint- 2LP Gatefold
LP...$7.99
Forget everything you know about Woody Herman – and enjoy this amazing record! The album compiles sides that Woody recorded at the end of the 60s, when he was working with the Chess/Cadet team on some fantastic funky big band material. Most of the tracks feature arrangements by Richard ... LP, Vinyl record album

Tough
Cadet, 1957. Very Good+
LP...$28.99
An obscure Art Blakey session from that unusual year of 1957 – a time when the Jazz Messengers had a very striking lineup – with Jackie McLean on alto, Bill Hardman on trumpet, and Sam Dockery on piano! The set was recorded in Minneapolis – a further mystery for the date, given ... LP, Vinyl record album

Back Talk (Fantabulous Oliver Nelson/Rough House Blues)
Chess/Cadet, Mid 60s/Mid 70s. Very Good+ 2LP Gatefold
LP...$6.99
A 70s 2-fer that combines 2 albums recorded for Cadet in the mid 60s – one issued under Nelson's name, the other under Lou Donaldson's, but both featuring arrangements by Nelson. The Nelson LP is a pretty darn nice session in which Nelson is the lead soloist with a large group that includes ... LP, Vinyl record album

Charlie Parker Memorial Concert
Cadet, 1970. Near Mint- 2LP
LP...$14.99
In Chicago, the cult of Bird fanatics probably lived harder than in other cities – and in the few decades after Charlie Parker's death, the city was host to annual Bird Memorial concerts during the month of August. This obscure 2LP set on Cadet does a good job of documenting the energy and ... LP, Vinyl record album

Ray Bryant Touch
Cadet, 1967. Very Good-
LP...$4.99
Simple stuff – but very nice! Ray's working here in a live trio setting – ala Ramsey Lewis or Les McCann from the same time – and his work on the album has a similar gutbuckety soul feel to it. The rhythm section of Jimmy Rowser bass and Rudy Collins drums is very tight – ... LP, Vinyl record album