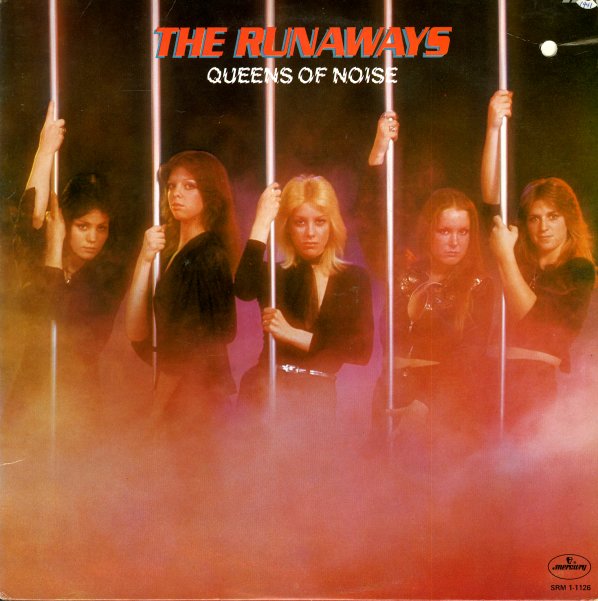 The second great album by Kim Fowley's pet Runaways – the album with Lita Ford, Joan Jett and the rest of the gals cloaked in fog and straddling polls on the cover – making them look like a cross between Mott The Hoople and the headliners at that seedy club by the airport! Like the debut, the Queens Of Noise album is total ear candy – and this one is actually probably even a little bit more consistent – and might rock a little harder, too. It's not quite as notorious without the illicit wallop of the group's debut single "Cherry Bomb" – but that's probably the only reason it's not as well remembered. They were still underage at this point, too, so the front-to-back innuendo still resonates! Buy this and the debut album, then take your Donna's CDs back to the mall! Tracks include "Queens Of Noise", "Take It Or Leave It", "Midnight Music", "Born To Be Bad", "Neon Angels On The Road To Ruin", "I Love Playing With Fire", "California Paradise", "Hollywood", "Heartbeat", and "Johnny Guitar".  © 1996-2021, Dusty Groove, Inc.
(Original pressing. Cover has a small name in pen at the bottom right corner.)

Gasoline Alley
Mercury, 1970. Very Good Gatefold
LP...$13.99
Genius, pure genius – and a record that will completely revise your thinking about Rod Stewart – a set that will blow away all the cliches you might know from later years, and will have you re-examining his early years in all their glorious brilliance! The sound is amazing right from ... LP, Vinyl record album

Songs From The Big Chair
Mercury, 1985. Very Good+
LP...$49.99
Was there a finer moment of 80s pop than this little gem? Maybe not – as the duo are at their most floppy-haired charming throughout – serving up some of the catchiest new romantic material of their generation, including the hits "Shout" and "Everybody Wants To Rule The ... LP, Vinyl record album

Peter Gabriel 3 – Melt
Mercury, 1980. Very Good+
LP...$19.99
Peter Gabriel at the top of his solo game – tight, focused, and coming across with a nice sort of edge – one that really sits nicely in the same late 70s generation that includes Bowie in Berlin, early Talking Heads, and some of the darker-minded work on the left side of the mainstream ... LP, Vinyl record album