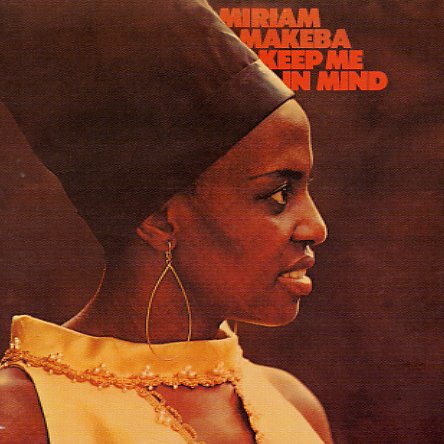 Also available
Miriam Makeba — Keep Me In Mind ... CD 12.99
One of Miriam Makeba's hippest albums of all time – a set that marked the end of her association with Reprise Records, and her fame in the crossover American scene of the 60s – and for good reason, too – as the whole thing's brimming over with much more righteous energy than ever before! Makeba's really letting loose here – not content to bring South African custom and culture to the overseas mainstream, but instead stepping forth with a new sense of mission and message – one that even comes through when she takes on some more familiar tunes by other artists at the time! The set features production from Lewis Merenstein, who'd done Astral Weeks – and the sound here is so different than Miriam's records from just a few years before – thanks also in part to the great backing arranged by George Butcher, which adds in lots of bass, percussion, and horns that take Miriam into a hipper 70s Afro Soul mode. Titles include "Lumumba", "Kulala", "Tululu", "Down On the Corner", "In My Life", and a great cover of "For What It's Worth".  © 1996-2023, Dusty Groove, Inc.
(Cover has partial splitting, light surface & edge wear.)

World Of Miriam Makeba
RCA, 1963. Near Mint-
LP...$9.99
One of Miriam Makeba's first albums released in the US. A hip set with backings by Hugh Masekela, in a mode that's got a nice South African soul groove to it – but which still had enough folksy touches to keep the American crossover audience happy. Titles on that one include "Forbidden ... LP, Vinyl record album