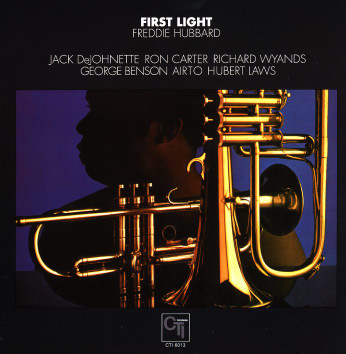 Sweet early CTI work from trumpeter Freddie Hubbard – the kind of groundbreaking electric jazz that really helped him find a new space in the 70s! The album follows strongly from Freddie's classic Red Clay set for CTI – and like that one, it features extended tracks that build beautifully as they roll on – taking Freddie's airy trumpet as the base, and layering in electric piano, flute, guitar, and percussion – plus some wonderfully subtle strings – used sparely, but in just the right way to underscore the wider vision of the record. Arrangements are by the mighty Don Sebesky – and other players include George Benson on guitar, Hubert Laws on flute, Phil Kraus on vibes, and Airto on percussion – plus Richard Wyands on the keys, making a rare CTI appearance here. Titles include a surprisingly great version of "Uncle Albert/Admiral Halsey" which has some great breaks in the middle – plus "First Light", "Moment To Moment", and "Yesterday's Dreams".  © 1996-2021, Dusty Groove, Inc.
(Original pressing with Van Gelder stamp. Cover has light wear, gloss separation around the edges and a bit of pen inside the gatefold.)

Free
CTI, 1972. Very Good+ Gatefold
LP...$19.99
One of the coolest, grooviest albums you'll ever hear from the legendary percussionist Airto – a set that mixes his own Brazilian roots with the electric genius of 70s CTI – all with stunning results! Airto's in the lead – and blows some beautiful wood flute lines alongside ... LP, Vinyl record album