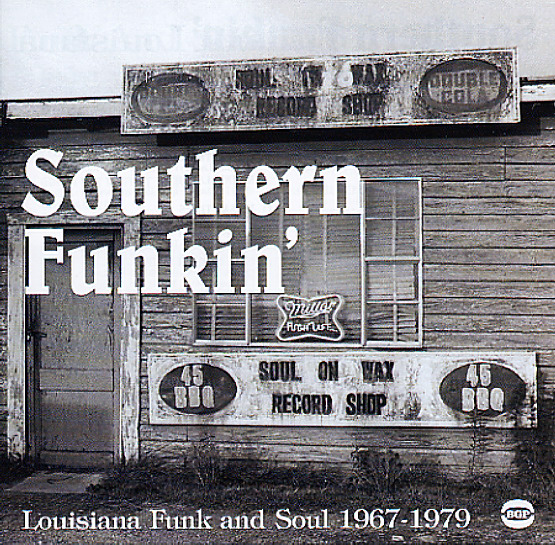 Also available
Various — Southern Funkin' – Louisiana Funk & Soul 1967 to 1979 ... CD 9.99
Heavy heavy funk from the Louisiana scene of the late 60s and 1970s – and a great collection that really gets past the dominance of the New Orleans sound! The set moves way past the Crescent City to uncover a wealth of great bits recorded in smaller studios located in Shreveport, Lake Charles, and a variety of tiny scenes in the southwest side of Louisiana – and the result is a great batch of tunes with a really gritty, down-n-dirty sound! There's a wealth of great funky styles in the set – including James Brown-inspired jammers, southern soul burners, and some other great modes that show that Louisiana's got a heck of a lot more to offer than just New Orleans funk. Titles include work from the Anla, Murco, Soul International, Goldband, and Tic Toc labels – a total of 22 cuts that include "Soul Time" by Ernest Thomas, "Soul Feeling (parts 1 & 2)" by Eddy G Giles, "Soul Brothers Testify (part 1)" by Chester Randles Soul Senders, "Soul Power" by Abraham & The Casanovas, "Put It On" by Count Rockin Sidney with The Dukes, "Fix It" by Clifton White & His Royal Knights, "Miss Hard To Get" by Dennis Landry, "No Sad Times" by Johnny Truit, "Black Water Gold" by African Music Machine, and "I Got A Groove" by JJ Callier.  © 1996-2022, Dusty Groove, Inc.