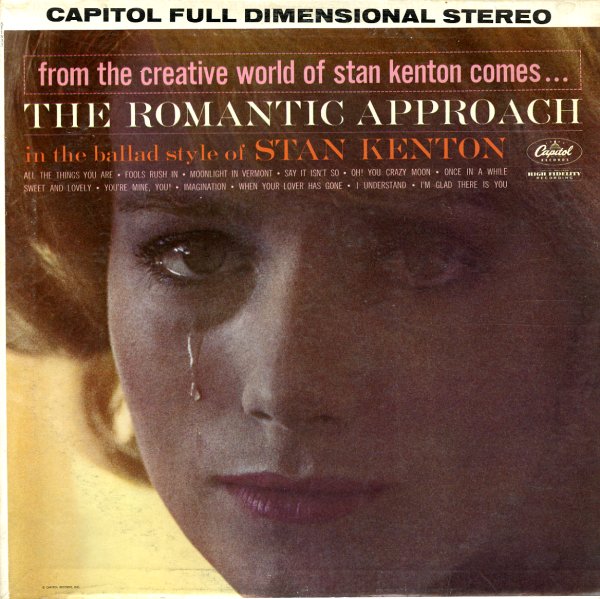 Beautiful beautiful work from Stan Kenton – an album that applies the dark tones of his arranging style to a range of popular numbers that end up completely transformed! The set has Stan working with some unusual instrumentation that features the Kenton-designed "mellophonium" – an odd larger horn that creates a beautiful shimmering finish in the brass section – one that pushes the Kenton "wall of color" style even further than before, as Stan takes the group through a set of lushly emotive numbers. The tones and sounds are still very much in the Kenton mode, despite the "romantic" tag in the title – with a style that shows that brings in the modern along with the mellow – on tracks that include "Fools Rush In", "You're Mine You", "Moonlight In Vermont", "I'm Glad There Is You", and "All The Things You Are".  © 1996-2022, Dusty Groove, Inc.
(Original pressing, including Kenton catalog inner sleeve.)

Kenton's West Side Story (Creative World)
Capitol, 1961. Near Mint-
LP...$3.99 7.99
A classic jazz interpretation of the score to West Side Story – served up in ultra-hip fashion by the Stan Kenton Orchestra! Although the tunes are familiar, the readings are extremely creative – and use Leonard Bernstein's original music as the starting point for a rich tapestry of ... LP, Vinyl record album

Adventures In Blues
Capitol, 1961. Near Mint-
LP...$3.99
With Stan at the helm, you can bet that this set is anything but "blues" in the traditional sense – and is instead more one of Kenton's tone poems of color – tuned to the darker hues of the spectrum, and served up perfectly in a batch of beautifully shimmering arrangements! ... LP, Vinyl record album

Back To Balboa
Capitol, 1957. Very Good
LP...$2.99
A late 50s classic from Stan – recorded at the Rendezvous Ballroom in Balboa Beach, which Kenton and the group had made their unofficial headquarters at the time! The album's got a perfect late 50s Kenton sound – a blend of styles that still has some of the modernism of the early 50s ... LP, Vinyl record album

Kenton Touch – Portraits In Strings
Capitol, 1958. Near Mint-
LP...$1.99 2.99
Although Stan Kenton's always best known for his famous work with 50s LA reedmen, he's equally great at working with strings as he is with saxes! This set reunites Stan with arranger Pete Rugolo – the darkly modern talent who helped Kenton hit some of his highest heights in the early 50s, ... LP, Vinyl record album