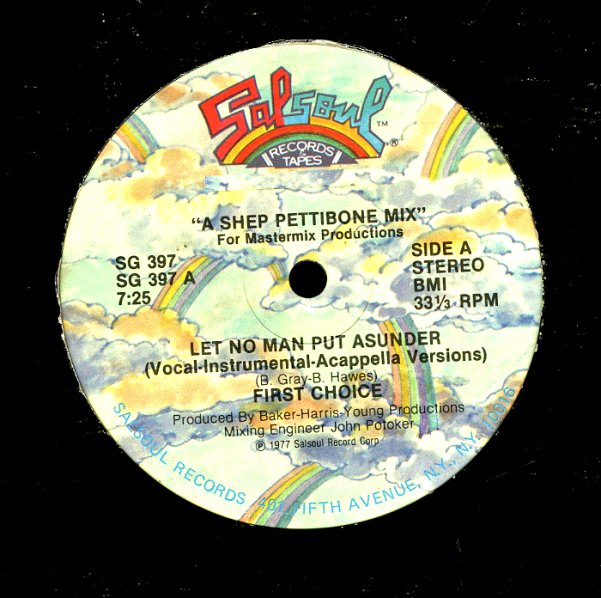 One of the best tracks ever by First Choice! "Let No Man" is a sweeping anthemic club track – with a righteous lyric about love and losing it, and some killer production by the Baker-Harris-Young team that really gives the girls a great soulful groove! The Frankie Knuckles mix has some great strings, too!  © 1996-2023, Dusty Groove, Inc.
(In a Salsoul sleeve. A-side label has some marker.)

Nice 'N' Naasty/Salsoul 3001
Salsoul, 1976. Near Mint-
12-inch...$3.99
Back to back slammers from Salsoul Orchestra! "Nice N Naasty" has a great funky bit on the intro – setting the scene for a jaunty groove that's not nearly as kitshcy as you'd expect from the title, and which has all the sweet Salsoul touches firmly in place! "3001" is ... 12-inch, Vinyl record

No Stoppin' That Rockin' (6:18, 6:50, dub, acapella)
Salsoul, 1982. Near Mint-
12-inch...$5.99
No rockin here, just a really solid club tune from Instant Funk – one that's got some great early 80s touches that almost slide into electro! There's a really catchy chorus vocal that percolates amidst the keys and guitar riffing – and the 6:50 mix on the flipside was done by Sergio ... 12-inch, Vinyl record