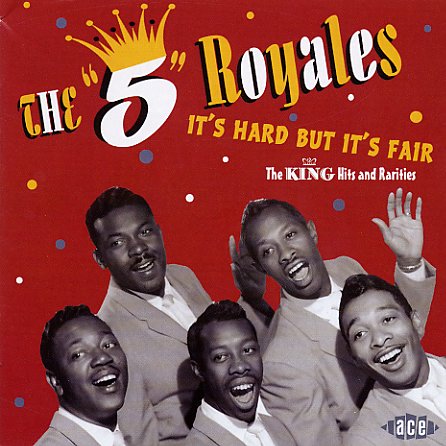 It's Hard But It's Fair – The King Hits & Rarities

An excellent collection of work by The 5 Royales – a 50s vocal group, but one who had a huge impact on soul music in the 60s! The Royales worked in a style that was harder-hitting and a bit more focused than some of their contemporaries – often using the voices in a very rhythmic way that really set the stage for the vocal group sound of the 60s. James Brown was one of a number of artists who claimed huge inspiration from the group – and that feeling is supported strongly in the liner notes by Steve Cropper, Billy Vera, and compiler Tony Rounce – who selected a great batch of 26 tunes that represent the best of the group's work for the King label! Titles include the original version of "Think", plus "Say It", "I Ain't Getting Caught", "Do Unto You", "Behave Yourself", "My Wants For Love", "It Hurts Inside", "Why", "I'm With You", "Dedicated To The One I Love", "Don't Give No More Than You Can Take", "The Slummer The Slum", and "Women About To Make Me Go Crazy".  © 1996-2022, Dusty Groove, Inc.