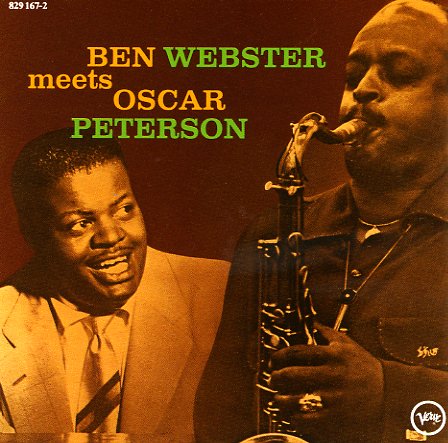 Beautifully laidback blowing from the great Ben Webster – captured here in perfect late 50s formation, with wonderful rhythm support from the Oscar Peterson Trio! The tunes aren't super-long, but still have a relatively open feel – possibly improvised in the studio, with a mellow but deeply soulful sound throughout, thanks to Webster's massive tone on the tenor sax. Peterson's on piano, and other players include Ray Brown on bass and Ed Thigpen on drums – and titles include "The Touch Of Your Lips", "When Your Lover Has Gone", "Bye Bye Blackbird", "How Deep Is The Ocean", "In The Wee Small Hours Of The Morning", "Sunday", and "This Can't Be Love".  © 1996-2022, Dusty Groove, Inc.
(180 gram Jazz Wax reissue.)

Kelly At Midnite
Vee Jay, 1960. Near Mint-
LP...$38.99
Midnite is right – as the session's a moody, mellow late nite one – just spare trio material by Wynton, played in a group that features Paul Chambers on bass and Philly Joe Jones on drums! The titles are all nice and long – and really let Kelly stretch out on the keys – ... LP, Vinyl record album