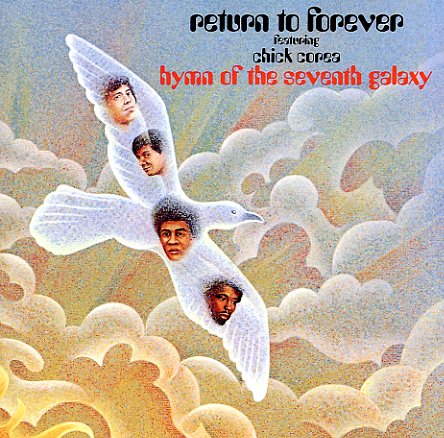 Somehow it seems to us that the members of Return To Forever always cut better albums under their own names than for RTF, but these sides are still not without their merit. Like everyone else, we're rethinking our distaste for fusion, and this set finds Chick Corea, Lenny White, Stanley Clarke and Bill Connors going all out from the get go, though our favorite track, "Space Circus" provides a nice breather, with an excellent electric piano intro, and a syncopated funky-ish groove in the main part of the tune that lives up to its name. Also includes the title track, "After The Cosmic Rain", "Captain Senor Mouse", "Theme To The Mothership" and "The Game Maker".  © 1996-2021, Dusty Groove, Inc.
(Cover has a lightly bent corner.)

Music Magic
Columbia, 1977. Very Good+
LP...$5.99
Lots of musical magic here – a further extension of the Return To Forever vibe that helped Chick Corea find some of his best energy of the 70s! The style is still as tightly focused as before, but also opens up with a bit more soul, too – trading some slight moments of jamming for a ... LP, Vinyl record album

Rising Sun
Polydor, 1977. Very Good-
LP...$19.99
Massive music from bassist Teruo Nakamura – a set that brings a Japanese take to the US fusion scene of the mid 70s – blending Teruo's warm, soulful vision with some great work from players who include Steve Grossman and Carter Jefferson on reeds, Lonnie Smith on keyboards, and Harry ... LP, Vinyl record album

Children Of Forever
Polydor, 1973. Very Good+
LP...$19.99
Quite possibly the hippest album that Stanley Clarke ever cut – a stretched-out soulful batch of jazz-tinged tracks – very much in the same spirit as the more righteous soul jazz underground of the time! In a way, the record would be much more at home on a label like Strata East than ... LP, Vinyl record album

Calling Out Loud
CTI/A&M, 1968. Near Mint- Gatefold
LP...$34.99
A pretty great little album from Nat – recorded with arrangements by Bill Fischer, who gives the record a tightly compressed big band sound that's perfect for Nat's sharp funky horn! The album's not exactly "funk", but there's plenty of it in the mix – as lead horn grooves ... LP, Vinyl record album