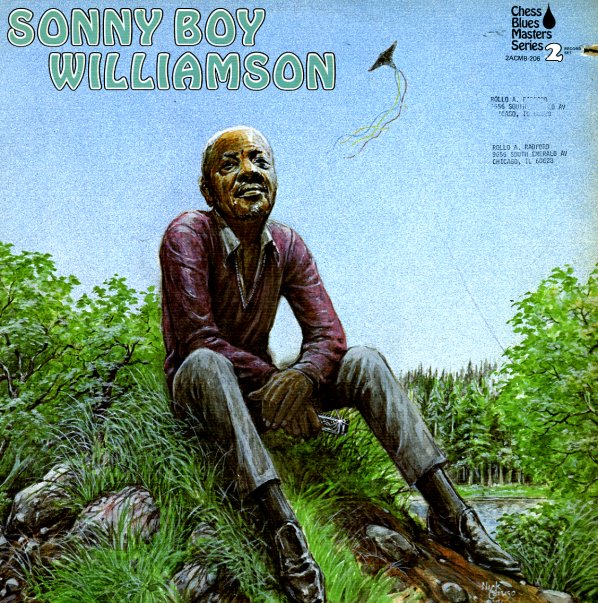 One in a series of double LP compilations Chess put out in the 70s collecting some of the classic blues sides in their catalog. As near as we can tell, these raw folk blues numbers were mostly issued as 45s, featuring Sonny Boy on vocals and harp, with sidemen that include Muddy Waters, Robert Jr Lockwood, Willie Dixon, Otis Spann and others. 28 tracks in all, including "One Way Out", "Don't Lose Your Eye", "Keep It To Yourself", "Sad To Be Alone", "Let Your Conscience Be Your Guide", "I Never Do Wrong", "I Don't Know", "Don't Start Me Talkin'", "Bring It On Home", "Key To Your Door", "All My Love In Vain", "Nine Below Zero", "Got To Move", "She Got Next To Me", "Keep Your Hand Out Of My Pocket", "Too Close Together", "Like Wolf" and "Santa Claus".  © 1996-2022, Dusty Groove, Inc.
(80s French Vogue pressing.)

Portrait In Blues
Storyville, 1963. Near Mint-
LP...$14.99
Features Sonny Boy Williamson on harmonic and vocals – in a trio with guitar from Matt Murphy and drums from Billie Stepney – plus added piano from Memphis Slim on a few tracks! LP, Vinyl record album

Real Folk Blues
Chess, Early 60s. Near Mint-
LP...$16.99 (CD...$1.99)
Not as folksy as you might think from the title – thanks to a really powerful presentation by Sonny Boy Williamson! The style here has echoes of Bo Diddley or Jimmy Reed's sense of rhythm – a more upbeat and electrified Chicago approach than Chess was serving up a decade before – ... LP, Vinyl record album

Best Of Little Walter
Chess, Early 50s. Near Mint-
LP...$19.99
A well-titled set – as the album features some of the best early sides that Little Walter recorded for Chess – records that went on to set a whole new standard both in blues vocals and harmonica! There's tightness here that's a bit different from some of the other Chess blues at the ... LP, Vinyl record album

Lightnin' Sam Hopkins
Arhoolie, 1962. Near Mint-
LP...$19.99
A gem of a record from the legendary Lightnin Hopkins – a set that adds in just a bit of extra instrumentation, including drums from Spider Kilpatrick on a few cuts, and additional bass and drums on a few more – all with a vibe that adds a slight extra kick to the Hopkins groove, but ... LP, Vinyl record album