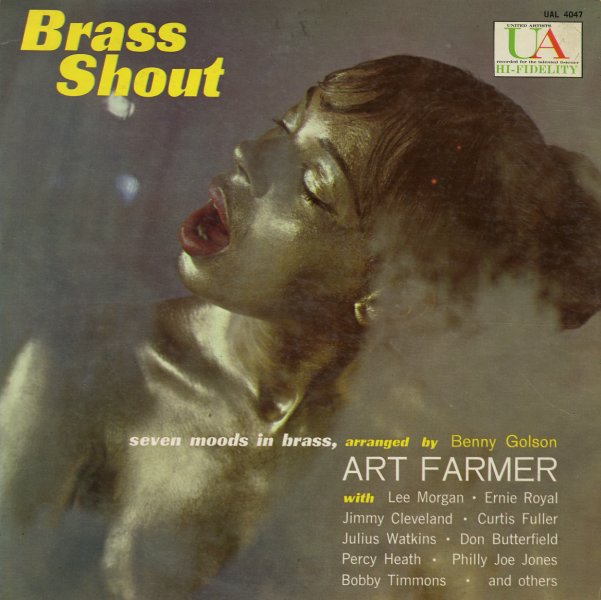 A great little album by this wonderful trumpeter – and one that we passed up for years because we were afraid of the words "brass" and "shout" in the title! If you're a Farmer fan, though, don't worry about this being some sort of snoozy "bold n brassy" session – because it's a much more subtle record, and features some excellent lead solos by Farmer, set amidst a larger group arranged wonderfully by Benny Golson! Golson brings a great sense of balance to the album – mixing some larger horn passages with soulfully snapping rhythms, all at a level that still allows plenty of space for Farmer to solo sweetly on trumpet. Other players on the record include Lee Morgan on trumpet and Curtis Fuller on trombone, Percy Heath on bass, and either Philly Joe Jones or Elvin Jones on drums – and titles include "Minor Vamp", "Nica's Dream", "Stella By Starlight", "Moanin", "April In Paris", and "Five Spot After Dark".  © 1996-2022, Dusty Groove, Inc.
(Japanese King pressing, with insert – LAX 3122)

Something You Got
CTI, 1977. Near Mint- Gatefold
LP...$13.99
A sweet funky album from Art Farmer– an artist we don't normally associate with 70s funk, but who does a really great job on this CTI session! Art's working here in the frontline with Yusef Lateef on reeds – another unlikely candidate for a record like this – and the pair get ... LP, Vinyl record album