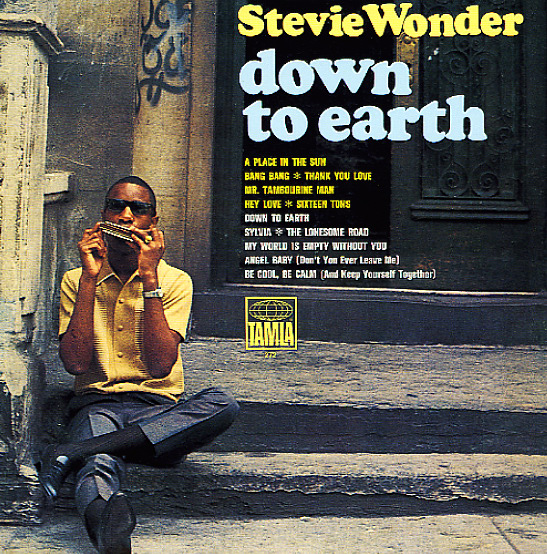 Sweet early soul from Stevie Wonder – an album that features his young and developing voice on a mixture of Motown soul tunes and pop covers done in a mellow sort of style. The record's still got Stevie's vocals swimming in larger backings and strings – but it does have these amazing breakout moments that really catch us off guard, coming through with a level of soul that's stripped down and lean – and which shines the gem that Stevie would soon become from this rough diamond stage! Good cuts include "Sylvia", "Thank You Love", "My World Is Empty Without You", and the sublime "Hey Love", which is one of Stevie's best cuts ever, and is worth the price of the record alone!  © 1996-2022, Dusty Groove, Inc.
(Mono two globes pressing with deep groove. Includes the Motown inner sleeve. Vinyl plays with some surface noise and faint crackles. Cover has light wear and aging, with some small stained spots in back.)

I Was Made To Love Her
Motown, 1967. Near Mint-
LP...$19.99 24.99
Excellent work from Stevie Wonder – and a record that really has him emerging strongly as an adult soul singer! The set's got a joyous power that's undeniable – a sense of pride and place that really points the way at the Stevie of the 70s, and which has Wonder stretching out ... LP, Vinyl record album

Up-Tight – Everything's Alright
Tamla, 1966. Very Good
LP...$19.99 24.99
Hard-swinging soul from mid 60s Stevie Wonder – and an album that really helped establish Stevie as a vocal star on his own! Gone are the "little blind boy" and Ray Charles cliches, gone are the "isn't it amazing that he can play the drums?" gimmicks – and in their ... LP, Vinyl record album

Music Of My Mind
Tamla, 1972. Very Good+ Gatefold
LP...$24.99
A pivotal album from Stevie Wonder – one of his first really heady records, and a tremendous little set from start to finish! The Wonder heard here is light years from the simple pop of the early days – really stretching out both as a songwriter and musician – coming up with a ... LP, Vinyl record album

Anthology – Looking Back
Motown, Late 60s/Mid 70s. Very Good+ 3LP Gatefold
LP...$11.99
A great set of Stevie's best tracks for Motown! 3 LPs deep, with 40 tracks in all, mostly from the late 60s, with a handful of numbers from the early 70s, including a few goodies that are getting tougher to find on wax. Includes "Hey Love", "Angie Girl", "Yester-Me, ... LP, Vinyl record album

Original Musiquarium I
Tamla, 1970s/Early 80s. Near Mint- 2LP Gatefold
LP...$34.99
A classic testament to the genius of Stevie Wonder – a collection that brings together some of his most important work of the 70s, plus a few new tracks too – all graced with a back cover note that proudly states "written, arranged, and produced by Stevie Wonder"! That note ... LP, Vinyl record album