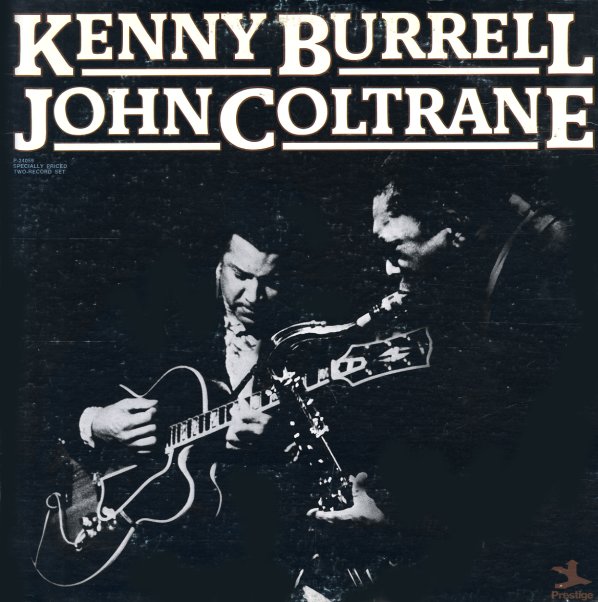 A great little two-fer that brings back some of Kenny Burrell's best work! The first disc on the set is the massive set he cut with Coltrane in 1958 – and it's not only some of Burrell's best guitar playing on record, but also a unique session that has Coltrane blowing extremely well, and extremely soulfully next to a guitar. Tracks on that one include "Big Paul", "Lyresto", and "Freight Trane". The second disc features the album The Cats – cut as a leaderless session with Burrell, Tommy Flanagan, Doug Watkins, Idrees Sulieman, and Coltrane. The set's got a hard blowing sound, in that best Prestige jam session mode – and it includes some great long numbers like "Eclypso", "Minor Mishap", and "Solacium".  © 1996-2022, Dusty Groove, Inc.
(Mid 70s issue. Cover has a thin strip of clear tape near the top and is stained and wavy at the bottom right corner.)

Tenor Madness
Prestige, 1956. Very Good
LP...$89.99 (CD...$4.99)
A groundbreaking album from Rollins, largely for the extended track "Tenor Madness", which runs on for 13 minutes, and features him and Coltrane blowing head to head – redefining the sound of the tenor sax in jazz through the course of that amazing track! Backing is by the Red ... LP, Vinyl record album

Cry Tender
New Jazz/Prestige, 1959. Near Mint-
LP...$34.99
Wonderful late 50s work by Yusef Lateef – played in that "jazz exotic" style he was using to perfect form at the time, a mixture of the lyrical hard bop of the Horace Silver group, with some of the more spare and eastern styles used by groups like the early Sun Ra Arkestra. The ... LP, Vinyl record album