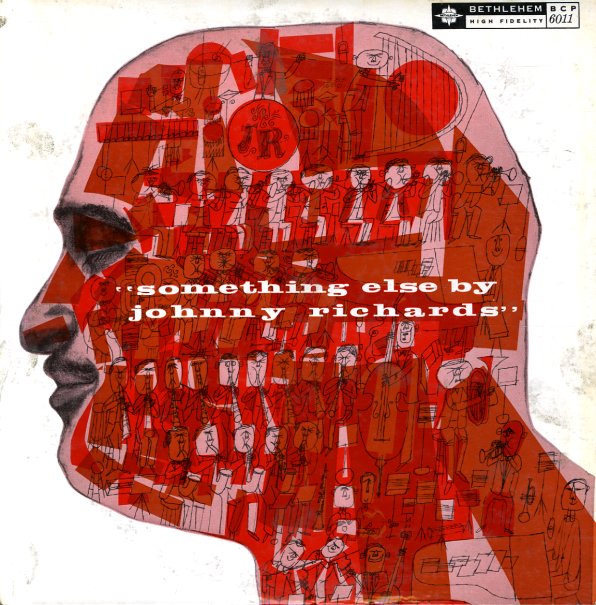 Something Else By Johnny Richards

Some of the best work ever from one of the most under-acknowledged jazz composers and arrangers of the 50s! Johnny Richards is probably best known for his recordings with Stan Kenton in the early part of the decade – but when he moved out on his own, he developed a tremendous sound that was even richer, even more full of color and tone than Kenton's own – and which was often done without any arch-modern tones, yet still fresh and free of cliche. The album's one of Richards' first as a leader – and features a wonderful lineup filled with top-shelf players – including Charlie Mariano on alto, Richie Kamuca on tenor, Stu Williamson and Pete Candoli on trumpets, and Frank Rosolino and Milt Bernhardt on trombones – all players who really bring a bold sort of energy to Johnny's vibrant arrangements. The sax work alone is tremendous – cutting with a beautiful edge across the larger charts – and titles include "Waltz Anyone", "Turn Aboot", "Band Aide", "Dimples", and "Burrito Borracho".  © 1996-2021, Dusty Groove, Inc.
(Heavy mono red label pressing with deep groove. Cover has center splits in the spine and bottom seam, some wear and aging, and bumped corners.)

Sounds In The Night
Bethlehem, 1957. Very Good
LP...$29.99
A very unusual album from Russ Garcia – one recorded with a vocal choir singing (mostly) wordlessly on the tunes! The style isn't scatting so much as it is a precursor to modes that would be used more heavily on later soundtracks – an approach that's jazz-based, and often colored with ... LP, Vinyl record album

I'll Never Forget What's Her Name (aka Four Horns & A Lush Life)
Bethlehem, 1955. Near Mint-
LP...$14.99
Great work from the hands of Russ Garcia – one of the most underrated arrangers of the 50s! Garcia's leading a 4-horn frontline that includes Frank Rosolino, Herbie Harper, Tommy Pederson, and Maynard Ferguson – with backing by a small rhythm group that includes Stan Levy, Red Mitchell ... LP, Vinyl record album

This Time The Drum's On Me
Bethlehem, 1955. Very Good-
LP...$29.99
A nice little bit of bop from LA – a tightly-crafted mid 50s date for the Bethlehem label – featuring drummer Stan Levey at the head of a great group of horn players! The album features some standout work from Dexter Gordon on tenor – making a rare appearance here as a sideman ... LP, Vinyl record album

Anything Goes
Kudu, 1975. Very Good-
LP...$3.99
Ron Carter gets sweet and funky on this 70s classic for Kudu Records – a set that's a fair bit different than some of Carter's acoustic trio sides of the decade, or some of his more high-concept work in recent years! The approach here is free and flowing – larger arrangements penned by ... LP, Vinyl record album