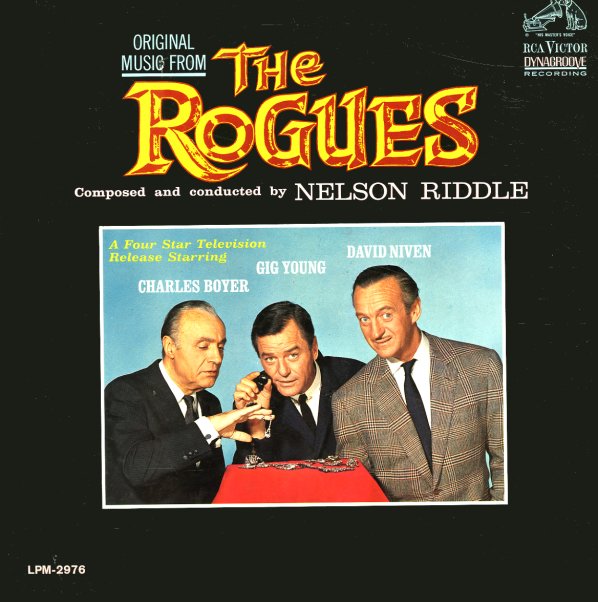 A wonderful lost Nelson Riddle soundtrack – scored for the "gentlemen criminal" show The Rogues, which ran briefly on NBC during the mid 60s – starring Charles Boyer, Gig Young, and David Niven! The work is some of our favorite by Riddle during the period – lightly dreamy with strings one minute, and upbeat and jazzy the next – a full summation of the genius he'd developed during his years at Capitol, and made even better by some really swinging tunes! There's almost a Henry Mancini vibe to the whole thing, but the music also shows some of Riddle's more complex approaches to scoring – and the group features performances by west coast jazz musicians who include Plas Johnson and Harry Klee on reeds, Jimmy Rowles on piano, Bob Bain on guitar, and Dick Nash on trombone. Titles include "A Rogue In Rio", "From Rogues To Riches", "Gig", "Marcel", "Ilsa", "Latin Lady", and "One For The Rogue".  © 1996-2021, Dusty Groove, Inc.
(Mono Dynagroove pressing with deep groove. Cover has some ring and edge wear and some light stains on back.)

Peter Gunn
RCA, 1959. Very Good
LP...$5.99
A classic! This is the record that made Mancini's career, and forever transformed the face of crime and jazz. The record's a stunning batch of instrumentals, played by a crack group of west coast players who also performed regularly in the TV show. Titles include the classic "Peter ... LP, Vinyl record album