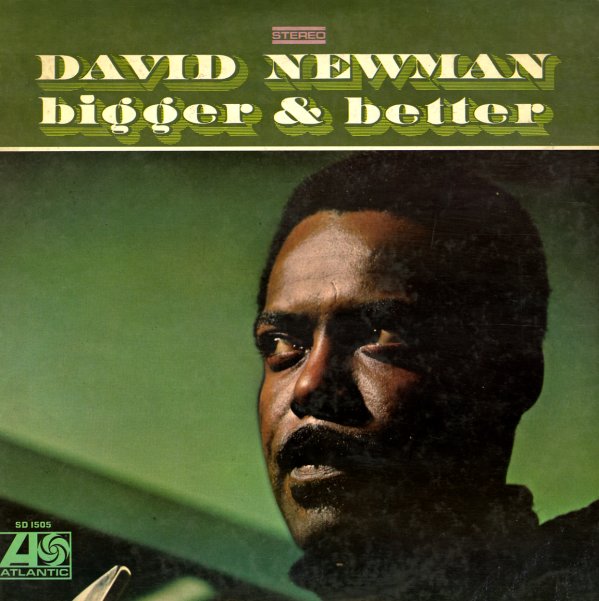 One of the best David Newman albums for Atlantic from the 60s – and one that breaks past the R&B-influenced formula of earlier albums! This one features some great arrangements by William Fischer, the cool wild-card arranger who was to late 60s Atlantic what David Axelrod was to Capitol at the same time. Fischer's touch isn't exactly funky – but it's certainly far-reaching, as he sets up David's funky tenor and flute in some very hip arrangements that mix together horns, strings, and soul production, in a mode that provides some of the best backings that Newman's ever had to solo over – a favor he returns admirably in his playing on the album! Includes the cool psychedelic number "The Thirteenth Floor", Eddie Harris-ish readings of "And I Love Her" and "Yesterday", and versions of Sam Cooke's "Ain't That Good News" and "A Change Is Gonna Come".  © 1996-2023, Dusty Groove, Inc.
(Red & green label pressing. Cover has a cutout notch.)

Fathead – Ray Charles Presents David Fathead Newman
Atlantic, 1958. Very Good+
LP...$4.99 11.99
David Newman's first album as a leader – recorded under the Ray Charles banner, and featuring Ray himself on piano! The set's a really surprising one – as it's much more jazz-based than we'd expect, given the Charles connection – and really steps out with some lively solo work ... LP, Vinyl record album

Aurora
Atlantic, 1976. Near Mint-
LP...$3.99
One of the hippest of Jean Luc Ponty's mainstream efforts from the 70s – a tightly jamming album that's made even better by plenty of keyboards from Patrice Rushen! Rushen's sound really brings a warmer, more soulful groove to the record – stretching out with flowing solos that remind ... LP, Vinyl record album

Four Brothers Sound
Atlantic, Late 50s. Very Good+
LP...$49.99
An amazing record by Jimmy Giuffre – one that he uses to replicate the "4 Brothers Sound" of the years when he played with Woody Herman as one of a group of four saxophonists blowing together – but done here by Jimmy himself on all 4 horns, using early overdubbing techniques ... LP, Vinyl record album