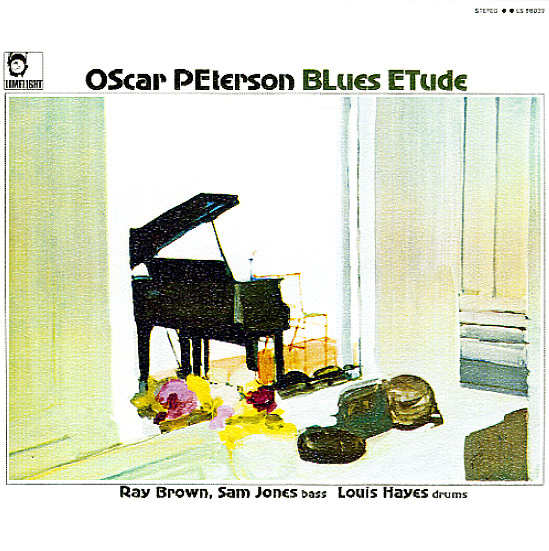 An overlooked 60s gem from Oscar Peterson – one of his great sides for Limelight Records, and possibly the most soulful of the bunch! The group's a trio – with either Sam Jones or Ray Brown on bass, and Louis Hayes on drums – and they've got a really great feel, one that's a bit different than some of Oscar's earlier groups of the 60s. Hayes' work on drums is nicely sensitive, and almost takes backseat to Peterson's rhythmic piano lines at times – and Jones' work on bass is always a treat, and kicks some of the best tracks here into a really great groove! The record's got a few great original titles, too – like the midtempo groover "Bossa Beguine", and the groovy "L'Impossible", a cool little instrumental that sounds like it was from a soundtrack by Francis Lai or Michel Legrand, and the title track "Blues Etude". Other titles include "Let's Fall In Love", "Shelley's World", "I Know You Oh So Well", and "Stella By Starlight".  © 1996-2022, Dusty Groove, Inc.
(Stereo pressing in the textured cover, with light aging and check marks in pen at the tracklist in back.)

Oscar Peterson Trio At JATP
Verve, Late 40s/Early 50s. Very Good+
LP...$11.99
A full album that compiles Jazz At The Philharmonic appearances by the Oscar Peterson Trio – a group that in this case features Ray Brown on bass and Barney Kessel on guitar! The tracks are all long and jamming – very open, and a bit harder hitting than some of Peterson's studio sides, ... LP, Vinyl record album

Tracks
MPS (Germany), 1969. Near Mint-
LP...$7.99
A solo sparkler from Oscar Peterson – recorded in a flurry of excellent late 60s recordings for MPS, and done in a warmly rhythmic mode that puts Peterson's solo work right up there in the ranks of Tatum and Garner! The production on the album is immaculate – done with a depth that ... LP, Vinyl record album

Oscar Peterson Plays The Cole Porter Song Book
Verve, 1959. Near Mint-
LP...$19.99 (CD...$4.99)
Cole Porter's tunes are great enough on their own, but Oscar really opens them up on this set – picking up the inherent rhythms in the numbers and really working them over – in a way that makes the outing one of the most lively in Peterson's songbook series for Verve! Oscar's fluid ... LP, Vinyl record album

Affinity
Verve, 1962. Very Good
LP...$16.99
Affinity – a beautiful word to describe the Peterson trio on this set – as at the time of the recording, Oscar's piano was perfectly matched with the bass of Ray Brown and the drums of Ed Thigpen! The album's got a simple genius that's hard to describe adequately – especially as ... LP, Vinyl record album

Motions & Emotions
MPS, 1969. Near Mint- Gatefold
LP...$14.99
Pure genius from Oscar Peterson – one of his finest moments ever! The record is very different than most of Oscar's over-recorded trio format ones – and features Claus Ogerman crafting some impeccable backings of lofty strings and compressed horns, creating a pillow of air that takes ... LP, Vinyl record album