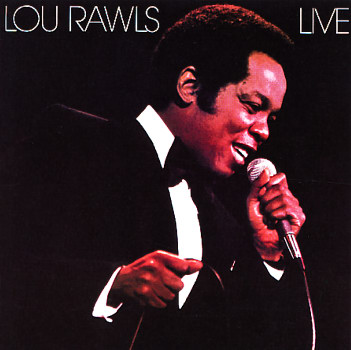 Just in case you were fearing that Lou's late 70s talents were only part of the studio magic of Gamble & Huff, this set proves that Mr Rawls could really sparkle in a spontaneous live setting – working here with a totally top-shelf set of arrangements that display a really wide range of his talents. Lou's a consummate entertainer throughout, and slips into some great patter that recalls some of the best bits on his Capitol albums – working the audience with charm and wit, then slipping into a tune without missing a beat. Titles include "This One's For You", "Groovy People", "Lady Love", "Charge Card Blues Medley", "Stay Awhile With Me", "A Lovely Way To Spend An Evening", "You'll Never Find Another Love Like Mine", and "When You Say Budwiser, You've Said It All" – Lou's version of the famous 70s commercial, dedicated to his sponsor!  © 1996-2023, Dusty Groove, Inc.
(Still sealed! Cover has a cutout hole. Shrink has light wear and a Nice Price sticker.)

Soulin'
Capitol, Late 60s. Very Good
LP...$3.99 7.99
One of the best albums that Lou Rawls cut with the team of HB Barnum and David Axelrod – that incredible duo who made some of his 60s Capitol albums so great! The style here is wonderful – upbeat grooves from Barnum – who brings more soul into Lou's music than before – ... LP, Vinyl record album

Sit Down & Talk To Me
Philadelphia International, 1979. Near Mint-
LP...$1.99
Not as hit-heavy as some of Lou's other albums for Philly International, but a nice batch of mellow jazzy soul tracks – with arrangements by Thom Bell, Bunny Sigler, Dexter Wansel, and others. Some of the tunes get nicely uptempo – hitting the warmer clubby modes that always worked ... LP, Vinyl record album

Nothing Says I Love You Like I Love You
Philadelphia International, 1978. Very Good
LP...$2.99
After working with Gamble & Huff on his big hits for Mercury in the late 60s, Jerry returned to work with the pair in the late 70s on their own Philly International label – stepping out with the same sweet groove that the Philly sound had brought to Lou Rawls, in a way that helped Butler ... LP, Vinyl record album

Message In The Music
Philadelphia International, 1976. Very Good
LP...$6.99
One of those records that really took Philly soul to the next level back in the 70s – a set that works amazing magic with the already-great harmonies of the O'Jays – pointing them even more strongly towards groove-heavy territory, while still keeping all the fragile, personal qualities ... LP, Vinyl record album

Wake Up Everybody
Philadelphia International, 1975. Very Good+
LP...$24.99
Teddy Pendergrass and crew get a bit more political than on earlier releases, and adopt the righteous bubbling soul groove that had put the O'Jays over the top a few years earlier – with incredible results! The title cut – "Wake Up Everybody" – would prove to be a great ... LP, Vinyl record album