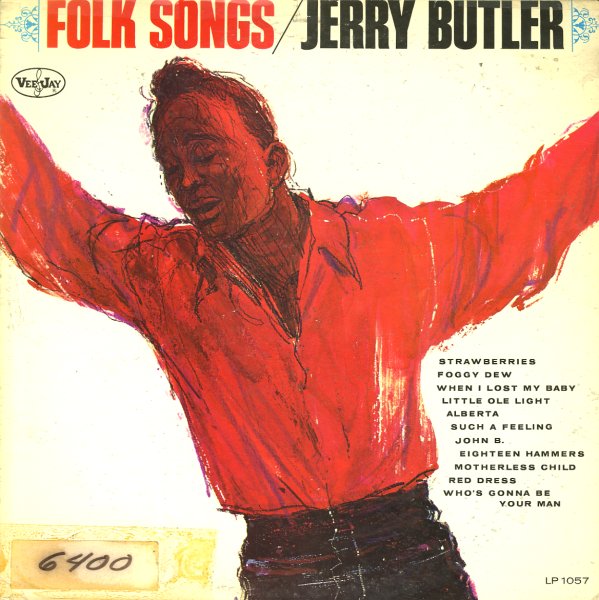 A great lost album from Jerry – and a key link in the hip Chicago scene that produced Terry Callier and Oscar Brown Jr! Sure, you might think of the album as a silly "cash in on the folk craze" effort – but Jerry keeps it soulful throughout, and thanks to some wonderful arrangements by Phil Moore III, the record stands out as one of the most compelling in Butler's early years. Jerry sings with a sophisticated style that turns the simple folk songs into compelling vocal numbers with a nice jazzy finish – and the backings are suitably varied from track to track, in a way that really spices up the album wonderfully. The album's got a bit of Terry Callier, a bit of Nina Simone, and a wonderfully large dose of Iceman soul! Titles include "Strawberries", "Eighteen Hammers", "Red Dress", "Who's Gonna Be Your Man", "Little Ole Lite", "When I Lost My Baby", and "Such A Feelin".  © 1996-2022, Dusty Groove, Inc.
(Late 80s rainbow label pressing. Cover has light wear and aging.)

Love's On The Menu
Motown, 1976. Very Good+
LP...$4.99
An overlooked sleeper from Jerry Butler – the kind of record that follows nicely off of his best strengths for Mercury in the early 70s – and which has him furthering the level of mature soul that was his greatest contribution to music in the decade! As before, the best tunes here are ... LP, Vinyl record album

Oh What A Night/Stay In My Corner (aka It's Not Unusual)
Buddah/Vee Jay, 1965. Near Mint-
LP...$6.99 9.99
Originally issued in 1965 by Vee Jay, and a wonderful album – unlike anything else the Dells ever recorded! Instead of their usual harmony soul and doo wop work, this album's a swinging jazz vocal workout – with the group harmonizing more in a Four Freshmen mode than a streetcorner one. ... LP, Vinyl record album