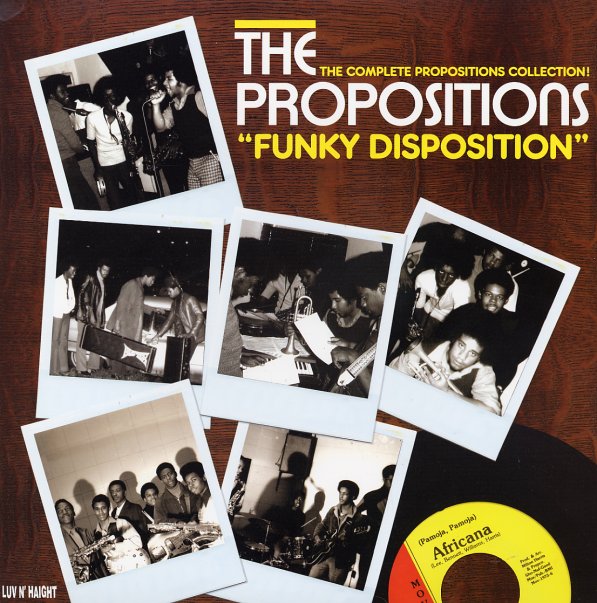 Thundering funk from the early 70s Detroit scene – and the complete work of The Propositions, a group who only ever managed to issue a few singles at the time! Due to a typo on the label of one single, the Propositions were also sometimes known as the Prepositions – but whatever the name, the band is pretty darn funky – as you'll hear in this excellent little set. Years back, the folks at Luv N Haight collected together the group's rare singles to make something of a full LP – but now, years later, they've gone back in the vaults and have come up with a huge amount of unreleased work to add to the mix – making for an overstuffed, double-length set that's filled to the rafters with great tunes. Most tracks are in a stone funky 45 mode – but they also groove out a bit longer than the usual single, and give the band plenty of room to roll around some great basslines and horn bits, which are in turn supported by some really wicked work on guitar, organ, and keyboards! Most tunes are instrumentals, and titles include "Funky Disposition", "Live Funk Session", "Do Whatever Turns You On (parts 1 & 2)", "Groovin For The Groove", "Something Different (long edit)", "Sweet Lucy", "Vamping", "Africana", "Free & Easy", "Bad Seed", "You've Been Chose", and "Kool Twist (live garage session 2)". 2CD package is filled with gems – a total of 20 tracks in all!  © 1996-2022, Dusty Groove, Inc.

On The Rise
Remined/Colemine, 1970. New Copy
CD...$10.99 13.99 (LP...$21.99)
A lost Ohio soul treasure – the initial effort by a singer with a hell of a voice, but one who languished in obscurity after the poor response to this debut LP! Barbara Howard really knocks it out of the park here – singing like a deep soul diva with a hell of a lot of power and focus ... CD