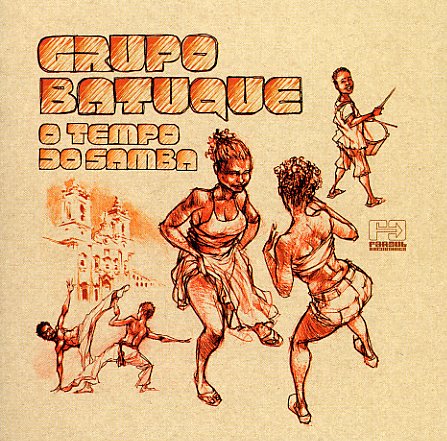 Another modern samba gem from the long-running Grupo Batuque – with a different sound than previous work and (we believe) a substantially re-tooled line-up – but don't fret, because this is a wonderful effort! The Brazilian percussion backbone of previous Grupo Batuque work is augmented on this album with a 70s soul jazz vibe fused with modern sounds – plus some of the African and hybridized elements we've come to expect! It has a positively sparking production, courtesy of Roc Hunter, and a clean sound that goes down surprising well with the persistent, thumping percussion, melodic vocals and sporadic modern elements. The crew seems to be spearheaded this time out by multi-instrumentalist Ivan Conti and percussionist/vocalist Cidinho Moreira – with vocals by Fabiola, Claudemir De Silva and others, percussion by Pirulito, cavaquinho by Lincoln De Lima, keys by Nico Resende and Marcos Nimrichter, bass and guitar by Alex Malheiros, horn arrangements by Leo Gandleman, trumpet by Bidinho and more! Another contender from Far Out Records! 18 tracks in all: "Bom Pra Kalimba", Cavasamba Um (edit)", "Nacao Tupi (edit)", "Afro Black", "O Tempo Do Samba Um (edit)", "Batucada Maneira", "Ida E Volta", "Cavasamba Dois (edit)", "Jacone", "Maracutaia", "Saldacao", "Mae Iemenja", "O Tempo" and more.  © 1996-2021, Dusty Groove, Inc.