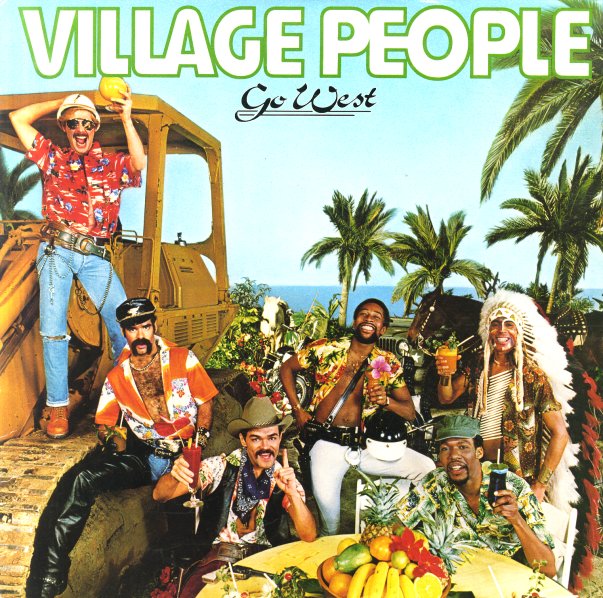 The only "west" these guys have gone is the West Village – the home of their aesthetic, and a post-Stonewall playground that was getting very firmly noticed by the mainstream by this point! The album's their last big one for Casablanca – and features arrangements from Horace Ott, who gives the record a surprisingly soulful core in the grooves – something that's also enforced by the production at the New York branch of Sigma Sound! Titles include the massive hit "In The Navy", plus the tracks "Go West", "Citizens Of The World", "I Wanna Shake Your Hand", "Manhattan Woman", and "Get Away Holiday".  © 1996-2021, Dusty Groove, Inc.
(Includes the fold-out poster!)

Macho Man
Casablanca, 1978. Very Good+
LP...$3.99
The macho aesthetic gets redefined for a whole new audience – as The Village People play with a pastiche of masculine images from daily life, all recast for the post-Stonewall generation! The group bring camp back firmly for the 70s – and are still one of the best-remembered mainstream ... LP, Vinyl record album

Hot Foot – A Funque Dizco Opera
Casablanca, 1979. Near Mint-
LP...$19.99
Despite the title, and Harvey's silly costume on the front cover, this is more of a funky outing than a disco one – not really the hard funk of Harvey's early singles, but a good batch of funky soul tracks done in a full-on production mode. Harvey's on lead vocals on most tracks, but the ... LP, Vinyl record album

Forever Yours
Casablanca, 1978. Very Good+
LP...$7.99
After cutting some pop disco crossover work for Capitol, the Sylvers finally get the chance to do the real deal here for Casablanca – grooving on tunes that burn stronger and groove longer than before – and which really set the scene for the bass-heavy funk of west coast groups to come! ... LP, Vinyl record album

Bad Reputation
Casablanca, 1979. Near Mint-
LP...$4.99
That's quite a Village People cover on the front – no surprise, as The Ritchie Family are also another key project from VP creator and disco wizard Jacques Morali! All the best Morali modes are firmly in place – that hard-driving, long-grooving style that's perfect for the clubs – ... LP, Vinyl record album

Trouble Maker
Casablanca/Oasis, 1976. Very Good+
LP...$2.99
Euro disco from Roberta Kelly – a set that looks like an American soul album from the cover, but which features backings from The Munich Machine and long-running arrangements from Giorgio Moroder! The record's got a similar feel to Moroder's work with Donna Summer – except that Roberta' ... LP, Vinyl record album