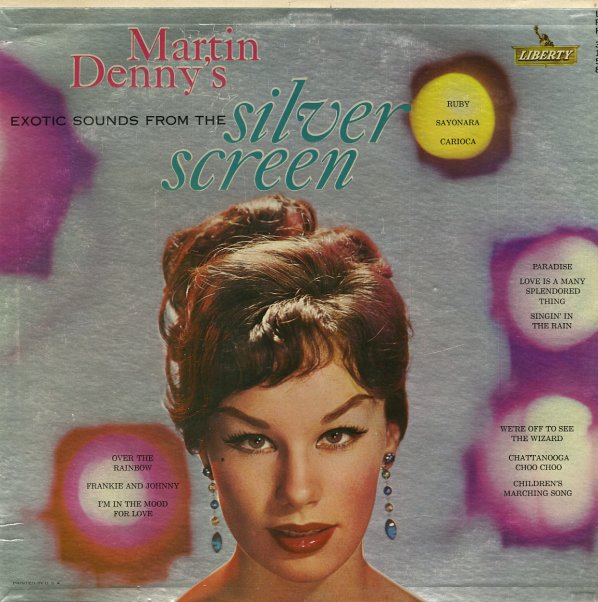 Exotic Sounds From The Silver Screen

Denny's combo with Augie Colon and Julius Wechter groove their way through some nice numbers from films of the 40s, 60s, and early 60s – mostly in the vein of familiar tunes, but as always, redone in a groovy exotic way by Denny's unique approach to easy instrumentals! The vibes, piano, and conga sound great together – and there's even some nice celeste on the album in a few parts. Titles include "Carioca", "Sayonara", "Paradise", "We're Off The See The Wizard", and "Love Is A Many Splendored Thing".  © 1996-2021, Dusty Groove, Inc.
(Cover has half split seams and a mark from sticker removal.)

Afro-Desia
Liberty, Late 50s. Very Good
LP...$8.99 (CD...$6.99)
Weird and wonderful work from the great Martin Denny – and a record that adds in some great extra elements to his core exotica groove! The depth of the album is apparent on the very first tune – "Tsetse Fly", which features a buzzing variation on the sound of the insect in ... LP, Vinyl record album

Waltz In Jazz Time
Liberty, Early 60s. Near Mint-
LP...$2.99
A very swinging album from trombonist Si Zentner – done in a big band style, but with plenty of groovy touches that show the 60s period of the recordings! Si gets some great help on the records from Bob Florence – an arranger who really knows how to make a bigger band swing with the ... LP, Vinyl record album

This Time With Strings
Coral, Mid 50s. Very Good+
LP...$18.99
Not as freewheeling as some of Raymond Scott's earlier work, but still quite nice – a set that features added strings in the mix, but used with a sound that's every bit as wild and dynamic as some of Scot's small combo recordings! A few of the tunes are familiar Scott classics, others are a ... LP, Vinyl record album