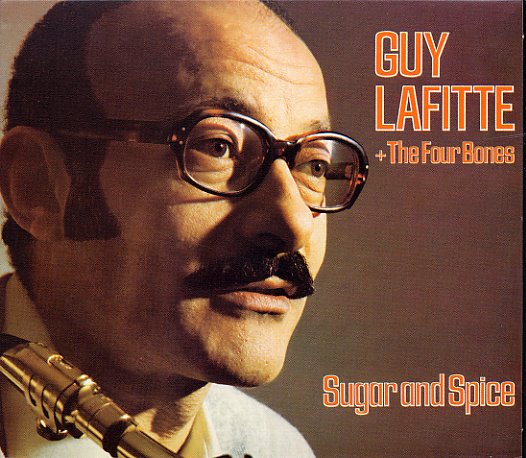 A rich, warm session from French tenor giant Guy Lafitte – one of the most soulful players to come out of the Paris scene of the postwar years, and a player with a sound that's somewhere between Coleman Hawkins and Ben Webster! Lafitte's really in his element here – blowing wonderfully laidback solos in a group that features a 4-piece trombone section on about half the album, plus some more stripped-down settings with Raymond Fol on piano. Given the date and the title, the set should come across as hokey, but for some reason it doesn't – and that's largely because Lafitte's tenor work is so compelling – like a voice from the past that you think you've heard before, but somehow missed. Great stuff all around – and with tracks that include "Teemoo", "Chloe", "Passion Flower", "Sugar & Spice", and "A Lollipop For Chris".  © 1996-2022, Dusty Groove, Inc.
(Original French pressing! Cover has some very light wear in a few spots – but this is a beautiful copy overall.)

Jambo
RCA (France), 1968. Near Mint-
LP...$68.99
One of the greatest albums ever recorded by Guy Lafitte – a wickedly soulful set that's overflowing with Latin and modern touches! Lafitte's in the lead on tenor, backed by a group that features the groundbreaking George Arvanitas trio at its core, plus trombone from Sonny Grey and guitar ... LP, Vinyl record album