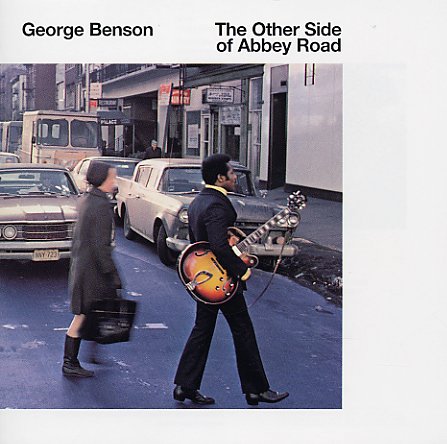 Also available
George Benson — Other Side Of Abbey Road (SHMCD pressing) ... CD 16.99
A wonderfully wicked album – one that sold so many copies that it's sometimes hard to remember how great it is! George takes on all of Abbey Road – or just about all of it – as he runs through some of the most beautiful tracks The Beatles ever wrote, like "Golden Slumbers", "I Want You (She's So Heavy)", "The End", "Because", and "You Never Give Me Your Money". The whole thing's set to some great baroque jazzy arrangements by Don Sebesky, and George digs the whole thing so much that he even sings a bit – vocalizing in a cool chromatic way that really works well with his guitar playing, and which would soon transform into a very popular style on his records of the 70s. Keyboards are by Bob James and Herbie Hancock – and there's plenty of other great jazz players in the mix!  © 1996-2022, Dusty Groove, Inc.
(Original gatefold pressing. Cover has a cutout hole, light wear, yellowing from age, and a value sticker.)

Good King Bad
CTI, 1975. Very Good+ Gatefold
LP...$5.99
Sweet 70s funk from George Benson – an album that's a bit smoother than some of his earlier work, but still free from the commercial polish of his later hits! Maestro David Matthews is at the helm for this session – and most numbers have a full backing from players who include some of ... LP, Vinyl record album

Deodato 2
CTI, 1973. Very Good Gatefold
LP...$8.99
Funky keyboards galore – and one of the greatest records ever from this legendary Brazilian jazz talent! The album follows nicely off Deodato's Prelude classic for CTI – and like that one, this set's built on long-flowing tunes that rise and fall with a wonderful sense of rhythm – ... LP, Vinyl record album

Prelude
CTI, 1973. Near Mint- Gatefold
LP...$14.99
A legendary album from the 70s funk scene – and one of the crowning achievements of keyboard maestro Eumir Deodato! Deodato got his start during the bossa years of the 60s – where his sophisticated charts were already enough to make his career a landmark – but in the following ... LP, Vinyl record album

Deodato In Concert – Live At The Felt Forum
CTI, 1974. Very Good+
LP...$9.99 (CD...$5.99)
An excellent little live set from Deodato – hard to believe because the sound's just as tight and funky as his studio albums, and possibly even more interesting because he manages to pull it off equally well in a live setting! The record features percussion by Airto, guitar by John Tropea, ... LP, Vinyl record album

Big Blues
CTI, 1979. Very Good+ Gatefold
LP...$11.99
Sweet and subtle genius from two of the most understated players in jazz – a really great little record that makes the best of the CTI sound without tricking up the players too much! Art Farmer and Jim Hall play in a quintet with vibes by Mike Mainieri – in a style that eschews the ... LP, Vinyl record album